A recent post on Realclimate claims to refute the recent CERN findings and Svensmark theory of cosmoclimatology, stating,


"Of course, to show that cosmic rays were actually responsible for some part of the recent warming, you would need to show that there was actually a decreasing trend in cosmic rays over recent decades – which is tricky, because there hasn’t been (see the figure)."

The "real climate scientists" at RealClimate, however, fail to plot a trend line to back up their claim. Plotting a polynomial fit to the same Oulu Neutron Monitor monthly data shows that cosmic ray counts did in fact show a long term declining trend from 1964 to 1997/1998, and a rising trend since, in accordance with the trend in global temperatures which rose to a peak in 1998 and have declined since. 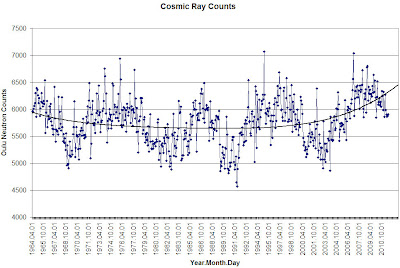