Alan Siddons on the negative-feedback cooling effect of clouds


While Dessler and Trenberth (among others) claim clouds have an overall positive feedback warming effect upon climate due to the long-wave back-radiation, this new paper shows that clouds have a large net cooling effect by blocking incoming solar radiation and increasing radiative cooling outside the tropics.


Now, I always focus on the basic claim that back-radiating greenhouse gases make the earth’s surface warmer. The earth’s SURFACE. Liquid clouds are often included as greenhouse agents because at nighttime they’re thought to reflect heat rays back to the earth and at least retard surface cooling if not actually raise the temperature. 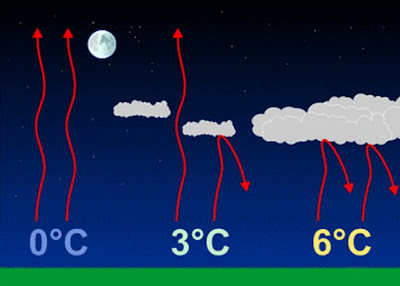 In other words, the same heating mechanism, that of back-radiation, is attributed to clouds because ‘radiative forcing’ theory assumes that opposing flows of infrared actively warm the surface —and always the surface alone, please note. Thus, for instance, Lindzen argues that 240 watts from the surface matched by 240 from the sky will make the surface radiate 480 watts per each square meter. But won’t make the sky radiate 480 in turn. 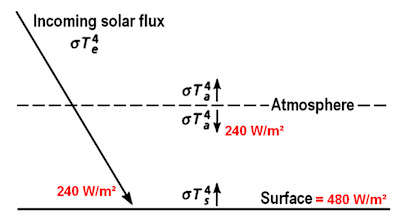 If you aim your attention on temperature, however, the impossibility of such a thing becomes apparent. For Lindzen’s scenario has a 255 Kelvin sky facing a 255 Kelvin surface — yet it is known that two bodies at the same temperature aren’t able to transfer heat to each other. Nor, of course, can one of those bodies raise the other’s temperature. 303 Kelvin resulting on the surface simply cannot happen, then. Likewise, Trenberth’s sky is at 275 K while the surface (radiating 66 watts per square meter) is at 185 K. Thus the surface can’t possibly get warmer than 275 K, or 1.8° Celsius. And at 1.8° the surface could only radiate 324 W/m² at most, not 390.


From this it’s obvious that opposing flows of radiation do NOT add, which exposes ‘radiative forcing’ as a fiction.
A focus on temperature is also revealing when it comes to water. As you know, water has a very high specific heat. This means that it takes a lot of thermal energy to raise its temperature. Heating water is a slow process because it stores more heat than almost any other substance. In a manner of speaking, water “hides” much of the heat you put into it, so we call this “latent heat.” Surprisingly too, when water cools off (also slowly) itreleases more heat than almost any other substance. The hidden heat breaks out, now becoming overt. These are two sides of the same strange coin.


If water had only a high specific heat and nothing else it would be remarkable enough. Since our planet’s surface is 71% water, after all, and most of it  pretty deep, water plays a dominant role in keeping us cool in daytime and warm at night. But water also evaporates when it’s heated, the resultant vapor carrying hidden and overt heat along with it. The direct impact of evaporation, then, is to reduce the surface temperature. As we know by the experience of sweating, evaporation takes thermal energy away. 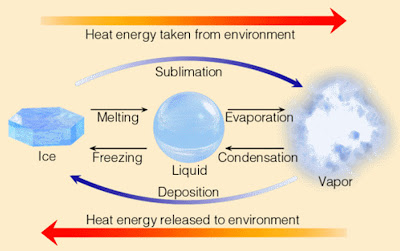 In other words, the generation of water vapor makes the earth cooler. This should give one pause, for water vapor is considered the principal ‘greenhouse gas,’ i.e., our planet’s foremost warming agent. Yes, water vapor lets loose its hidden heat when it cools and condenses again, but where does this release generally occur?
Up there. High above our heads. Water vapor is light and buoyant, and as it steadily rises in the atmosphere it encounters steady cooling. When it meets the condensation point it turns into a cloud, a mist of very fine water droplets. Much of water’s latent heat then escapes. Does this heat head back to the earth’s surface, though? No, it can’t. Because the earth below is warmer – in fact surface heat is driving the evaporation process. So the heat released by a cloud can only migrate to ever colder regions, as heat always does. The surface doesn’t profit.
Adding to this the simple fact that a cloud reflects sunlight and shades the surface below, and it should come as no surprise that Allan’s study reached the conclusion that it did. Neither clouds nor the water vapor they form from can increase the earth’s surface temperature. Not just clouds themselves, then, but the thermodynamics of making clouds constitute a vast cooling process on the surface.
This doesn’t completely negate any heating effect, however. At night, what was warm before and what was cooler can reverse. That is, the surface temperature often drops below the sky temperature.

This inversion can also involve clouds that have moved in. In such cases it is perfectly permissible for a cloud to transfer heat to the surface, even radiatively. Indeed, as outlined above, ‘back-radiation’ onto the surface can’t perform such a task, only a body with a higher relative temperature. In other cases, where the nighttime surface is the warmer body, it remains that water has a high specific heat. Thus the mass of water that a cloud represents will tend to cool rather slowly, like a nighttime lake. Consequently, a surface that’s sending heat to that cloud will cool more slowly too.
Nevertheless, one mustn’t lose sight of the big picture. Vaporized water steals heat from the earth’s surface. Becoming a cloud, it steals even more. Only after it has lost heat to its colder surroundings is a cloud born in daytime able to give back some heat to a landscape at night. But what it gives back doesn’t come close to what it took away. So the net effect of clouds and of cloud formation is, reasonably enough, to cool. This should have been understood a long time ago.
Alan
Posted by MS at 8:27 PM