In tomorrow’s New York Times, I’ve got a long story about a growing sense among scientists that science itself is getting dysfunctional. For them, the clearest sign of this dysfunction is the growing rate of retractions of scientific papers, either due to errors or due to misconduct. But retractions represent just the most obvious symptom of deep institutional problems with how science is done these days–how projects get funded, how scientists find jobs, and how they keep labs up and running.  Along with the main story, I also wrote a sidebar about how hard it is to hear from the scientists who write retracted papers. I also spoke on the latest Timescast video, which I’ve embedded below. I show up with Arturo Casadevall at about 4:30. There are also lots of links in my story to the original papers. And if you don’t already read it, be sure to check out the blog Retraction Watch, which has been digging deep into the retraction story for years now.
A Sharp Rise in Retractions Prompts Calls for Reform

In the fall of 2010, Dr. Ferric C. Fang made an unsettling discovery. Dr. Fang, who is editor in chief of the journal Infection and Immunity, found that one of his authors had doctored several papers.
It was a new experience for him. “Prior to that time,” he said in an interview, “Infection and Immunity had only retracted nine articles over a 40-year period.”
The journal wound up retracting six of the papers from the author, Naoki Mori of the University of the Ryukyus in Japan. And it soon became clear that Infection and Immunity was hardly the only victim of Dr. Mori’s misconduct. Since then, other scientific journals have retracted two dozen of his papers, according to the watchdog blog Retraction Watch.
“Nobody had noticed the whole thing was rotten,” said Dr. Fang, who is a professor at the University of Washington School of Medicine.
Dr. Fang became curious how far the rot extended. To find out, he teamed up with a fellow editor at the journal, Dr. Arturo Casadevall of the Albert Einstein College of Medicine in New York. And before long they reached a troubling conclusion: not only that retractions were rising at an alarming rate, but that retractions were just a manifestation of a much more profound problem — “a symptom of a dysfunctional scientific climate,” as Dr. Fang put it. 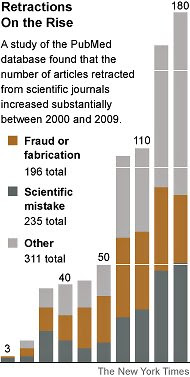