The Ideology of Catastrophe

These are not great souls who alert us to troubles but tiny minds who wish us suffering if we refuse to listen to them.

As an asteroid hurtles toward Earth, terrified citizens pour into the streets of Brussels to stare at the mammoth object growing before their eyes. Soon, it will pass harmlessly by—but first, a strange old man, Professor Philippulus, dressed in a white sheet and wearing a long beard, appears, beating a gong and crying: "This is a punishment; repent, for the world is ending!"
We smile at the silliness of this scene from the Tintin comic strip "L'Étoile Mystérieuse," published in Belgium in 1941. Yet it is also familiar, since so many people in both Europe and the United States have recently convinced themselves that the End is nigh. Professor Philippulus has managed to achieve power in governments, the media and high places generally. Constantly, he spreads fear: of progress, science, demographics, global warming, technology, food. In five years or in 10 years, temperatures will rise, Earth will be uninhabitable, natural disasters will multiply, the climate will bring us to war, and nuclear plants will explode.
Man has committed the sin of pride; he has destroyed his habitat and ravaged the planet; he must atone.
My point is not to minimize our dangers. Rather, it is to understand why apocalyptic fear has gripped so many of our leaders, scientists and intellectuals, who insist on reasoning and arguing as though they were following the scripts of mediocre Hollywood disaster movies.
Over the last half-century, leftist intellectuals have identified two great scapegoats for the world's woes. First, Marxism designated capitalism as responsible for human misery. Second, "Third World" ideology, disappointed by the bourgeois indulgences of the working class, targeted the West, supposedly the inventer of slavery, colonialism and imperialism.
The guilty party that environmentalism now accuses—mankind itself, in its will to dominate the planet—is essentially a composite of the previous two, a capitalism invented by a West that oppresses peoples and destroys the Earth.
Environmentalism sees itself as the fulfillment of all earlier critiques. "There are only two solutions," Bolivian president Evo Morales declared in 2009. "Either capitalism dies, or Mother Earth dies."
"Our house is burning, but we are not paying attention," said Jacques Chirac, then president of France, at the World Summit on Sustainable Development in 2002. "Nature, mutilated, overexploited, cannot recover, and we refuse to admit it." 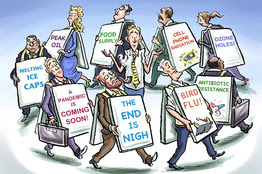 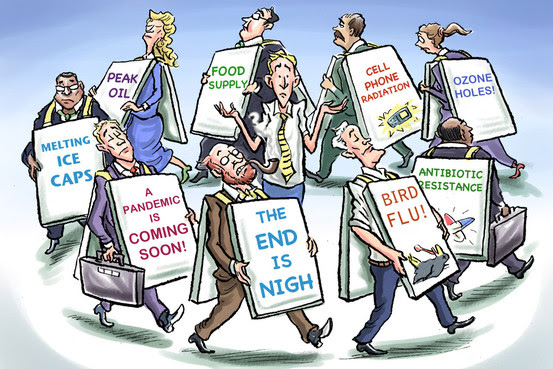 Chad Crowe
Sir Martin Rees, a British astrophysicist and former president of the Royal Society, gives humanity a 50% chance of surviving beyond the 21st century. Oncologists and toxicologists predict that the end of mankind should arrive even earlier, around 2060, thanks to a general sterilization of sperm.
One could cite such quotations forever, given the spread of apocalyptic literature. Authors, journalists, politicians and scientists compete in their portrayal of abomination and claim for themselves a hyperlucidity: They alone see the future clearly while others vegetate in the darkness.
The fear that these intellectuals spread is like a gluttonous enzyme that swallows up an anxiety, feeds on it, and then leaves it behind for new ones. When the Fukushima nuclear plant melted down after the enormous earthquake in Japan in March 2011, it only confirmed an existing anxiety that was looking for some content. In six months, some new concern will grip us: a pandemic, bird flu, the food supply, melting ice caps, cell-phone radiation.
The fear becomes a self-fulfilling prophecy, with the press reporting, as though it were a surprise, that young people are haunted by the very concerns about global warming that the media continually broadcast. As in an echo chamber, opinion polls reflect the views promulgated by the media.
We are inoculated against anxiety by the repetition of the same themes, which become a narcotic we can't do without.
A time-honored strategy of cataclysmic discourse, whether performed by preachers or by propagandists, is the retroactive correction. This technique consists of accumulating a staggering amount of horrifying news and then—at the end—tempering it with a slim ray of hope.
First you break down all resistance; then you offer an escape route to your stunned audience. Thus the advertising copy for the Al Gore documentary "An Inconvenient Truth" reads: "Humanity is sitting on a time bomb. If the vast majority of the world's scientists are right, we have just ten years to avert a major catastrophe that could send our entire planet's climate system into a tail-spin of epic destruction involving extreme weather, floods, droughts, epidemics and killer heat waves beyond anything we have ever experienced—a catastrophe of our own making."
Here are the means that the former vice president, like most environmentalists, proposes to reduce carbon-dioxide emissions: using low-energy light bulbs; driving less; checking your tire pressure; recycling; rejecting unnecessary packaging; adjusting your thermostat; planting a tree; and turning off electrical appliances. Since we find ourselves at a loss before planetary threats, we will convert our powerlessness into propitiatory gestures, which will give us the illusion of action. First the ideology of catastrophe terrorizes us; then it appeases us by proposing the little rituals of a post-technological animism.
But let's be clear: A cosmic calamity is not averted by checking tire pressure or sorting garbage.
Another contradiction in apocalyptic discourse is that, though it tries desperately to awaken us, to convince us of planetary chaos, it eventually deadens us, making our eventual disappearance part of our everyday routine. At first, yes, the kind of doom that we hear about—acidification of the oceans, pollution of the air—charges our calm existence with a strange excitement. But the certainty of the prophecies makes this effect short-lived.
We begin to suspect that the numberless Cassandras who prophesy all around us do not intend to warn us so much as to condemn us.
In classical Judaism, the prophet sought to give new life to God's cause against kings and the powerful. In Christianity, millenarian movements embodied a hope for justice against a church wallowing in luxury and vice. But in a secular society, a prophet has no function other than indignation. So it happens that he becomes intoxicated with his own words and claims a legitimacy with no basis, calling down the destruction that he pretends to warn against.
You'll get what you've got coming! That is the death wish that our misanthropes address to us. These are not great souls who alert us to troubles but tiny minds who wish us suffering if we have the presumption to refuse to listen to them. Catastrophe is not their fear but their joy. It is a short distance from lucidity to bitterness, from prediction to anathema.
Another result of the doomsayers' certainty is that their preaching, by inoculating us against the poison of terror, brings about petrification. The trembling that they want to inculcate falls flat. Anxiety has the last word. We were supposed to be alerted; instead, we are disarmed. This may even be the goal of the noisy panic: to dazzle us in order to make us docile. Instead of encouraging resistance, it propagates discouragement and despair. The ideology of catastrophe becomes an instrument of political and philosophical resignation.
Mr. Bruckner is a French writer and philosopher whose latest book is "The Paradox of Love" (Princeton University Press, 2012). This article, translated by Alexis Cornel, is excerpted from the Spring 2012 issue of City Journal.
Posted by MS at 5:23 PM