Published this week in the NIPCC Report:

Working with 2249 globally-distributed monthly temperature records covering the period 1906-2005, which they obtained from NASA's Goddard Institute for Space Studies, Ludecke et al. (2011) evaluated "to what extent the temperature rise in the past 100 years was a trend or a natural fluctuation."

According to the authors, "the mean of all stations shows 0.58°C global warming from 1906 to 2005," but they say that "if we consider only those stations with a population of under 1000 and below 800 meters above sea level, this figure drops to 0.41°C." In addition, they note that "about a quarter of all records show falling temperatures," which in itself, in their words, "is an indication that the observed temperature series are predominantly natural fluctuations," where the word natural means that "we do not have within a defined confidence interval a definitely positive anthropogenic contribution." And continuing to explore this aspect of their analysis, they evaluated - with a confidence interval of 95% - the probability that the observed global warming from 1906 to 2005 was a natural fluctuation, finding that probability to lie "between 40% and 70%, depending on the station's characteristics," while "for the period 1906 to 1955 the probabilities are arranged between 80% and 90% and for 1956 to 2005 between 60% and 70%."

Based on their several findings, the authors write in the final sentence of the abstract of their paper that the strongest statement they can make on the subject is that "only a marginal anthropogenic contribution cannot be excluded," which suggests to us that if there is a CO2-induced warming signal hidden somewhere in the global temperature data of the Goddard Institute for Space Studies, it must be relatively small, as is suggested by the observation-based analyses of Idso (1998), Lindzen and Choi (2009, 2011) and Scafetta (2012).

Lindzen, R.S. and Choi, Y.-S. 2011. On the observational determination of climate sensitivity and its implications. Asia-Pacific Journal of Atmospheric Sciences 47: 377-390. 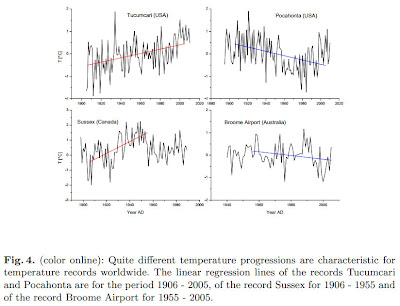