LONDON—The market for carbon emissions is running out of gas.
Prices of emission allowances, which award the holder the right to release carbon dioxide into the atmosphere, have tumbled this week to a record low. They are down 11% from the start of the year and now trade at less than one-fourth of their July 2008 value.
The latest blow came Monday, when the European Union released preliminary data showing its carbon emissions fell by a larger-than-expected amount last year. While decreasing amounts of pollution out of Europe are a boon for the environment, it raises questions about the viability of a market that was hailed as a forerunner for the rest of the world. 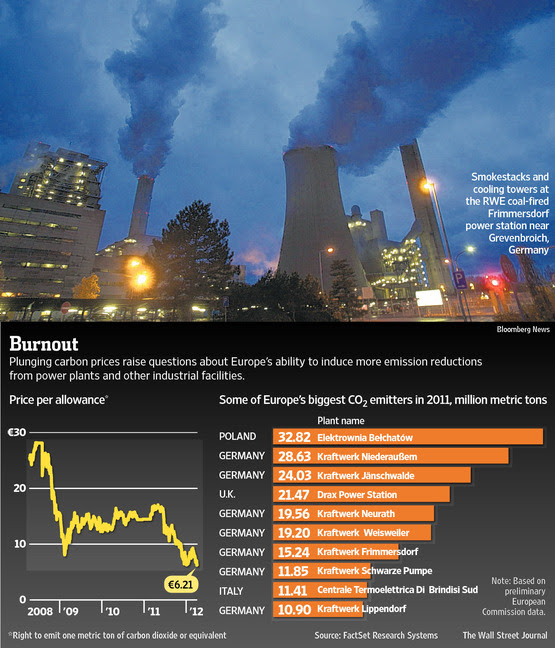 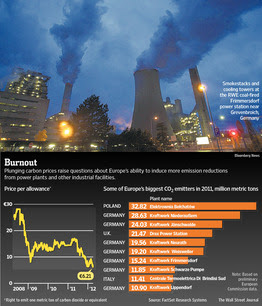 "The price level reflects a lack of confidence in the tool," said Emmanuel Fages, head of power, gas, carbon and coal research at Société Générale Commodities in Paris.
The decline in prices comes as investors continue to retrench from the market. Hopes that other nations, such as the U.S., would adopt the EU model have been dashed, and international climate talks have made slow progress on a global consensus. Trading desks have been scaled back, and banks, which previously had been big players in the market, are no longer making big bets.
Under a system known as "cap and trade," the European Union in 2005 launched trading in these allowances after putting a cap on the amount of carbon dioxide or similar gases that certain sectors, such as utilities, could emit. The idea was to encourage investment in clean-energy technologies and cleaner-burning fuels. Companies that came in below their caps could sell their allowances on the open market and make a profit.
But lately, things haven't been going according to plan. As Europe's economy has contracted, big emitters such as power plants have been operating at slower rates and releasing less gas. With less demand for these allowances, a glut in supply has emerged, driving prices down. On Wednesday, prices for allowances on ICE Futures Europe finished 2.2% lower, at €6.21 ($8.22) a metric ton of carbon dioxide after sliding as low as €5.99. Prices are down about 65% over the past year.
The collapse in prices has cast doubt on whether the system can withstand a prolonged economic slump and about whether the EU can muster the political will to bolster prices. Some analysts expect the supply glut to worsen. Deutsche Bank boosted its estimate of the oversupply by 2020 by more than 50%, to 1.063 billion allowances.
"The magnitude of this projected surplus out to 2020 underlines the urgent need for action to be taken by the EU authorities to re-establish scarcity" in the emissions-trading system, known as ETS, said Mark Lewis, head of energy research at Deutsche Bank.
The move is gaining ground in Brussels, with the European Commission, the European Parliament and a number of industrial companies in favor of actions to prop up prices. The most probable option would be the withdrawal of permits from the ETS, effectively causing a shortage to boost prices. That action essentially would have the effect of pushing some companies to develop clean-energy technologies.
Some companies that favor intervention have drafted strategies around the ETS and need to get a return on their investments. Others, like Royal Dutch Shell PLC, promote clean technologies that have a future only with high emission-allowance prices. "The economic crisis has significantly impacted the effectiveness of the EU ETS," said David Hone, Shell's climate-change adviser. "The [carbon dioxide] price is currently too low to drive the development of low-carbon technologies. For the EU to meet its longer-term climate-change goals, the [carbon dioxide] price in Europe today needs to be strengthened."
To be sure, there still are some signs of life. CME Group Inc. said Tuesday that it would buy out its partners in the Green Exchange, which runs emissions-trading platforms in Europe and the U.S. Trading volumes in Europe are up this year as utilities and other businesses buy allowances ahead of a change in the rules that foresees fewer handed out free next year. Under an overhaul of the ETS scheduled for 2013, more industrial sectors, such as producers of petrochemicals, ammonia and aluminum, would be required to comply with emissions caps.
But there are some who are opposed to changing the trading system. Action "would create a risky precedent in trying to manipulate a market-based mechanism," said William Garcia, executive director for energy at Cefic, an EU chemicals lobby group in Brussels, adding that it would undermine the credibility of the system. "The ETS is not broken, it's delivering what's supposed to."
The fall in prices has created incentives for burning more coal for electricity generation in Europe. According to the U.K.'s natural gas and power network operator, National Grid PLC, coal accounted for 46% of generation in the first quarter of this year compared with 26% for natural gas. That is a higher percentage for coal compared with previous quarters.
Analysts say carbon prices would need to be at about €15 a ton to encourage the switch out of coal into natural gas. Market observers are awaiting a June 15 Council of Energy Ministers meeting to see if the EU is serious about withdrawing allowances in order to drive up prices.
Poland recently vetoed nonbinding goals that would lead the EU to meet an agreed target of cutting carbon dioxide emissions by at least 80% by 2050.
"This year is the most legitimate opportunity to fix the market, but the window of opportunity is rapidly closing," said Damien Morris, senior policy adviser for U.K.-based climate group Sandbag.
Posted by MS at 10:11 AM