Even if you believe man-made CO2 has any significant effect upon climate, turning off your lights for Earth Hour is a colossal waste of time and energy, which will actually cause CO2 emissions to increase. Plus, it ignores how electricity has been a boon for humanity.


Earth Hour Is a Colossal Waste of Time—and Energy

Plus, it ignores how electricity has been a boon for humanity 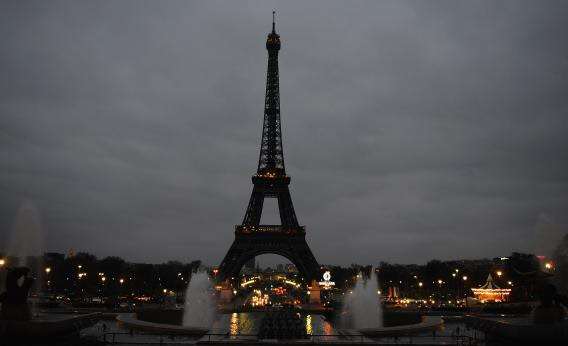 The Eiffel Tower is seen after the lights are turned off during Earth Hour 2012 in Paris.
Photo by Antoine Antoniol/Getty Images
On the evening of March 23, 1.3 billion people will go without light at 8:30—and at 9:30, and at 10:30, and for the rest of the night—just like every other night of the year. With no access to electricity, darkness after sunset is a constant reality for these people.
At the same time, another 1 billion people will participate in “Earth Hour” by turning off their lights from 8:30-9:30.

The organizers say that they are providing a way to demonstrate one’s desire to “do something” about global warming. But the reality is that Earth Hour teaches all the wrong lessens, and it actually increases CO2 emissions. Its vain symbolism reveals exactly what is wrong with today’s feel-good environmentalism.

Earth Hour teaches us that tackling global warming is easy. Yet, by switching off the lights, all we are doing is making it harder to see.

Notice that you have not been asked to switch off anything really inconvenient, like your heating or air-conditioning, television, computer, mobile phone, or any of the myriad technologies that depend on affordable, plentiful energy electricity and make modern life possible. If switching off the lights for one hour per year really were beneficial, why would we not do it for the other 8,759?

Hypothetically, switching off the lights for an hour would cut CO2 emissions from power plants around the world. But, even if everyone in the entire world cut all residential lighting, and this translated entirely into CO2 reduction, it would be the equivalent of China pausing its CO2 emissions for less than four minutes. In fact, Earth Hour will cause emissions to increase.
As the United Kingdom’s National Grid operators have found, a small decline in electricity consumption does not translate into less energy being pumped into the grid, and therefore will not reduce emissions. Moreover, during Earth Hour, any significant drop in electricity demand will entail a reduction in CO2 emissions during the hour, but it will be offset by the surge from firing up coal or gas stations to restore electricity supplies afterward.
And the cozy candles that many participants will light, which seem so natural and environmentally friendly, are still fossil fuels—and almost 100 times less efficient than incandescent light bulbs. Using one candle for each switched-off bulb cancels out even the theoretical CO2 reduction; using two candles means that you emit more CO2.
Electricity has given humanity huge benefits. Almost 3 billion people still burn dung, twigs, and other traditional fuels indoors to cook and keep warm, generating noxious fumes that kill an estimated 2 million people each year, mostly women and children. Likewise, just 100 years ago, the average American family spent six hours each week during cold months shoveling six tons of coal into the furnace (not to mention cleaning the coal dust from carpets, furniture, curtains, and bedclothes). In the developed world today, electric stoves and heaters have banished indoor air pollution.
Similarly, electricity has allowed us to mechanize much of our world, ending most backbreaking work. The washing machine liberated women from spending endless hours carrying water and beating clothing on scrub boards. The refrigerator made it possible for almost everyone to eat more fruits and vegetables, and to stop eating rotten food, which is the main reason why the most prevalent cancer for men in the United States in 1930, stomach cancer, is the least prevalent now.
Electricity has allowed us to irrigate fields and synthesize fertilizer from air. The light that it powers has enabled us to have active, productive lives past sunset. The electricity that people in rich countries consume is, on average, equivalent to the energy of 56 servants helping them. Even people in Sub-Saharan Africa have electricity equivalent to about three servants. They need more of it, not less.
This is relevant not only for the world’s poor. Because of rising energy prices from green subsidies, 800,000 German households can no longer pay their electricity bills. In the United Kingdom, there are now more than 5 million fuel-poor people, and the country’s electricity regulator now publicly worries that environmental targets could lead to blackouts in less than nine months.
Today, we produce only a small fraction of the energy that we need from solar and wind—0.7 percent from wind and just 0.1 percent from solar. These technologies currently are too expensive. They are also unreliable (we still have no idea what to do when the wind is not blowing). Even with optimistic assumptions, the International Energy Agency estimates that, by 2035, we will produce just 2.4 percent of our energy from wind and 0.8 percent from solar.
To green the world’s energy, we should abandon the old-fashioned policy of subsidizing unreliable solar and wind—a policy that has failed for 20 years, and that will fail for the next 22. Instead, we should focus on inventing new, more efficient green technologies to outcompete fossil fuels.
If we really want a sustainable future for all of humanity and our planet, we shouldn’t plunge ourselves back into darkness. Tackling climate change by turning off the lights and eating dinner by candlelight smacks of the “let them eat cake” approach to the world’s problems that appeals only to well-electrified, comfortable elites.
Focusing on green R&D might not feel as good as participating in a global gabfest with flashlights and good intentions, but it is a much brighter idea.
This article was originally published by Project Syndicate. For more from Project Syndicate, visit their Web site. Bjorn Lomborg is author of "The Skeptical Environmentalist."
Posted by MS at 6:25 PM