WSJ.COM 3/6/13:  The environmental community is throwing a fit over President Obama's nomination of nuclear physicist Ernest Moniz to run the Department of Energy. Their protests are primarily a comment on just how radicalized the green movement has become in recent years.
Mr. Moniz, after all, is exactly the sort of true-believer environmentalist that one would expect Mr. Obama to nominate to follow Steven Chu. The physicist is a huge supporter of throwing taxpayer dollars at renewable energy projects, which has unfortunately become one of DOE's core functions. (See Solyndra, and other bankrupt grant recipients.) Mr. Moniz helped write a 2010 report from his perch on the President's Council of Advisors on Science and Technology that recommended dumping $16 billion a year into renewables)—or three times the previous amount.
He has warned about climate change, and complained that there hasn't been enough action to combat it. The MIT Energy Initiative, which he directs at the Massachusetts Institute of Technology, has studied natural gas and fracking, and it has led Mr. Moniz to parrot the usual environmental lines about water contamination and methane leaks. In Senate testimony two years ago, he suggested regulation would be best if "applied uniformly to all shales," which suggests he is in favor (as most greens are) of the feds taking over regulation of fracking from the states. 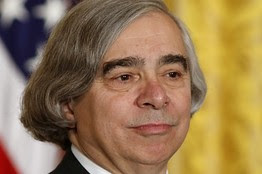 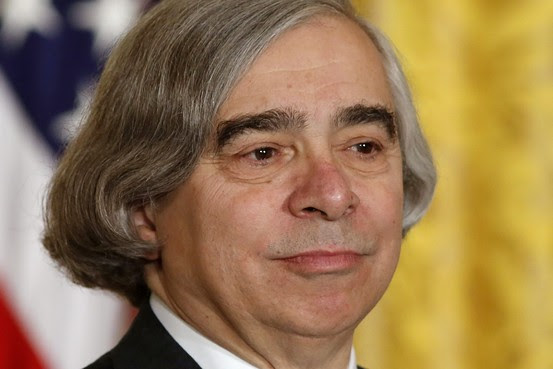 Reuters
Nominee for Secretary of Energy Ernest Moniz
And yet the left is up in arms. "At a time when the last thing we should be doing is undermining our progress against climate change, Moniz is the wrong choice to head one of the most important agencies in the fight for a sustainable energy future," complained Elijah Zarlin, who works at progressive activist group CREDO Action. Food and Water Watch, an anti-fracking outfit, declared that his nomination "could set renewable energy development back years." Greenpeace moaned that Mr. Moniz was a "strange choice to pair with the president's choice to fight global warming."
Mr. Moniz's sin, it would seem, is in favoring natural gas as a "bridge fuel" until such time as the greens' vision of all-renewable world comes to pass. This is hardly controversial, and was in fact exactly the view of nearly every environmental group not so long ago. Green outfits pushed and praised natural-gas as a low-carbon alternative to oil and coal, and liked especially that dwindling natural-gas supplies (at that time) kept gas prices high and closer to the cost of renewables.
But as the fracking breakthrough has produced a gush of natural gas, lowering prices and creating a jobs boom, green groups have violently turned against the fuel and declared anyone who continues to support it a heretic. This would include Mr. Moniz, for daring to suggest, as he did at the Senate hearing, that "natural gas can indeed play an important role in the next couple of decades (together with demand management) in economically advancing a clean energy system." Even though Mr. Moniz wants to further regulate fracking, and ultimately phase gas out, this is still too much for a green movement that, under Mr. Obama, has developed zero tolerance for fossil fuels.
Mr. Moniz is also under attack for holding the view that nuclear should remain part of the energy mix—an uncontroversial view among most policymakers but a new bright line for a growing number of greens. And the physicist gets rapped for the fact that the MIT Energy Initiative has accepted some money from fossil fuel companies. Not that.
What makes these complaints odd is that Mr. Moniz has the potential to be a bigger thorn in conservatives' sides than Mr. Chu. A former Clinton administration official, Mr. Moniz is likely to be more Beltway savvy than his predecessor. And while Mr. Chu largely focused on renewable investment, Mr. Moniz's wide range of interests could signal that he'll drag Energy into bigger fights over fracking and climate.
Posted by MS at 6:39 PM