Dr. Claes Johnson, KTH Professor of Applied Mathematics, has a post today demonstrating that computer models of radiation transmitted by the atmosphere attribute a warming effect of CO2 which is at least 20 times more powerful than that of water vapor. This is despite water vapor being a more powerful greenhouse gas, with a much wider absorption interval that also significantly overlaps the CO2 interval to further trivialize the effect of CO2. Climate models also assume that increased CO2 will increase water vapor, despite observations showing that water vapor has decreased. Furthermore, there is no evidence to support the global warming theory that outgoing longwave radiation [OLR] has decreased due to increased CO2, since satellite observations instead show an increase in OLR.

From a prior post demonstrating that the CO2 absorption interval is already significantly overlapped by water vapor:

The hard scientific evidence of the warming effect of atmospheric CO2 consists of radiation spectra computed by the atmospheric radiation model Modtran, predicting a "radiative forcing" of 3.7 W/m2 from doubling of the concentration of CO2 to 0.06% from preindustrial level of 0.03%.

To get perspective, let us use the online model of Modtran to compare the present 0.039% of CO2 with a typical value of 2% water vapor. We get the following OLR spectrum for a 1976 USA standard atmosphere with 1.7 ppm CH4, trop. ozone 28 ppb, strat ozone scale 1: 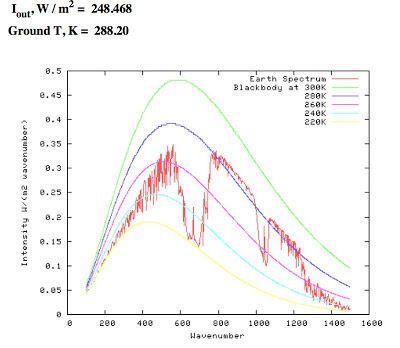 Modtran thus attributes a warming effect of CO2 which is at least 20 times more powerful than that of water vapor!!

We can now summarize the recent posts on Modtran as the hard evidence of CO2 alarmism: