The Otter Way of Stopping

A futile and stupid--not to mention crazy and lawless--plan to "save the planet."

By JAMES TARANTO
WSJ.COM 3/11/13:  The Obama administration continues to drag its feet on approving the Keystone XL pipeline, which would transport crude oil from Canada through the American Great Plains to refineries on the Gulf of Mexico. Environmentalists oppose the pipeline because they hate oil, which they claim causes "climate change." 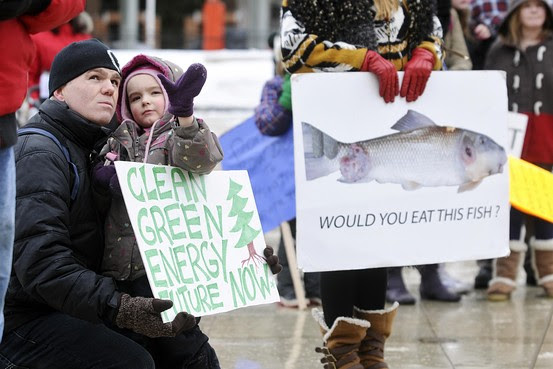 Following Friedman's advice
The New York Times editorial page demands that President Obama reject the pipeline "for one overriding reason: A president who has repeatedly identified climate change as one of humanity's most pressing dangers cannot in good conscience approve a project that--even by the State Department's most cautious calculations--can only add to the problem."
It's not as if the Canadians lack other options. If the administration nixes the project, they'll extract the oil and ship it on tankers to Asia. The Times says that would still be preferable because it would "slow down plans" to expand production and "force the construction of new pipelines through Canada itself," which in turn would "require Canadians to play a larger role in deciding whether a massive expansion of tar sands development is prudent." It sounds to us as if the Canadians have already made their call on that one.
In the last paragraph of the editorial--yes, we read it all the way through; this job has its hardships--the Times makes one hell of a concession: "In itself, the Keystone pipeline will not push the world into a climate apocalypse." So why all the fuss, eh? It seems the Times has borrowed its governing philosophy from Otter, a character in the classic political comedy "Animal House": "I think that this situation absolutely requires a really futile and stupid gesture be done on somebody's part!"

Following Friedman's advice
Futile and stupid aren't enough for Times columnist Thomas Friedman. He agrees with his editors that Obama ought to put the kibosh on Keystone, but he doubts the president will. "So I hope that Bill McKibben"--an environmental extremist--"and his 350.org coalition go crazy."
By "crazy," he means lawless: "I'm talking chain-themselves-to-the-White-House-fence-stop-traffic-at-the-Capitol kind of crazy, because I think if we all make enough noise about this, we might be able to trade a lousy Keystone pipeline for some really good systemic responses to climate change. . . . So cue up the protests, and pay no attention to people counseling rational and mature behavior."
Remember when the Times and some of its columnists were crusading to silence "uncivil" language by their political adversaries and media rivals? By contrast, directly urging unlawful activity is acceptable on the pages of the Times if it furthers a leftist agenda.
...
Krugman proposes to avoid a debt crisis by going deeper into debt in the hope that will produce full employment and make the debt sustainable. It sounds crazy to us. A saner way of creating some jobs would be to approve the Keystone XL pipeline.
Posted by MS at 1:54 PM