Avid environmentalist challenges climate change alarmistsBy Jean Bartlett,  San Jose Mercury News, 10/15/13
Born in Cincinnati, Ohio, raised from age five in the Boston area, Pacifican Jim Steele first headed off to attend the mechanical engineering program at the University of Massachusetts in 1968. But with the Vietnam War raging, Steele feared his career would revolve around wartime production. So he dropped out, went to work on social justice issues, and then backpacked around the country, touring as many National Parks as possible. Inspired by nature, he went on to pursue a degree in biology at San Francisco State University, through their ecology and systematics program. While finishing his Masters, the SFSU Dean of Science appointed Steele to the director's position of SFSU's Sierra Nevada field campus. There Steele built an environmental education program and pursued environmental research. He served as director of the Sierra Nevada field campus for 25 years, while also teaching science in the San Francisco school district. He and his wife Kristen have lived in Pacifica for 21 years. Their son Jared is a graduate of IBL and Terra Nova High School and is currently attending Oregon University.

About 10 years ago, while working to restore watershed and wildlife habitat, Steele said it became clear that landscape changes and natural cycles had a much greater impact on wildlife than climate change. The initial plan was to write on the subject for various magazines and websites, but he realized only a book could tell the whole story. This Sunday, Steele will be at Florey's to sign and discuss the book which developed from these earlier musings — "Landscapes & Cycles" (An Environmentalist's Journey to Climate Skepticism). 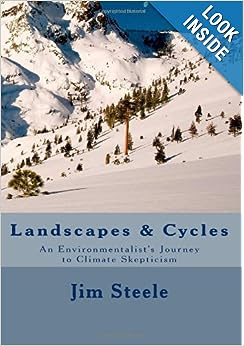 "The more I researched the causes of change in wildlife populations and local climates, the more I became appalled by the amount of bad science that was too easily published simply because it agreed with the prevailing bias of climate catastrophes," Steele said. "Every other chapter of the book highlights different species whose decline was mistakenly blamed on rising CO2."

In the first chapter, Steele was asked by the U.S. Forest Service to study the bird communities in high mountain meadows in the Tahoe National Forest. What caused a sudden collapse in those populations?" Steele's research revealed the decline was due to the placement of a railroad track 100 years earlier. The track had disrupted the meadow's stream flow and caused the meadow to start to "desert-ify." Landscape change not climate change was the key. (A partnership was formed to restore the watershed and most of the species have rebounded.)

In another chapter, he discusses the colony of emperor penguins featured in the film, "March of the Penguins."

"Despite that global warming models suggesting they will go extinct, the local temperature trend has never shown any warming," Steele explained. "The faulty model was based on a drop in numbers in the '70s when researchers were disturbing the colony and three islands were dynamited to make an airstrip. Likewise a chapter on Adélie penguins shows except for one small region, the Adélie penguins have been steadily increasing. The penguins that are genuinely endangered are not in Antarctica but on islands like the Galapagos where introduced cats and rats decimate the populations."

Two of his chapters are dedicated to polar bears. Steele presents evidence that the Arctic food web has benefitted from less ice. He also challenges a number of the claims of Camille Parmesan, currently a professor in the Section of Integrative Biology at The University of Texas at Austin. Parmesan's research focuses on the current impacts of climate change on wildlife, both terrestrial and aquatic. In 1996, she published findings regarding the geographical, northward and upward range shift of butterflies which she explained as a response to climate change.

"Her results were a statistical illusion caused by the growing urban sprawl in southern California that eradicated more prime habitat in the south," Steele said. "Preserving butterfly habitat and natural weather cycles have now sparked population recovery and Parmesan admits many populations she had claimed were 'extirpated' have now repopulated.:

"One bad study may seem inconsequential," Steele went on to say, "but then our top climate scientists asked Parmesan to coauthor another paper and used that faulty conclusion to argue that a trivial 0.7 C degree rise in global temperatures, was causing deadly extremes and disrupting the local ecological balance. That paper went viral and over 1000 scientists cited their paper as 'proof' of climate catastrophe."

Steele said that while he believes humans have undeniably caused an increase in concentrations of carbon dioxide, he thinks its effect on climate is trivial compared to other factors — naming a few here.

"I have found landscape changes such as urban heat islands, lost vegetation and lost wetlands are more influential," the author said. "Satellite data show grasslands surface temperatures reach 10 to 20 degrees higher than forested areas, and barren ground exceeds grasslands by another 10 to 20 degrees. The loss of wetlands raises temperatures, and California has lost half of its wetlands and has altered 99% of its streams."

Steele said a big part of his book's message is to get people to look into their own backyard and make changes there, in order to make changes for the entire world.

"For example, what gets lost in the politics of climate change is that east coast communities that had restored protective tidal marshes and sand dunes did not suffer the same consequences from Superstorm Sandy as communities that didn't," Steele noted. "To think we can stop floods by controlling our carbon footprint is a delusion."

"My hope is my book will separate the politics climate change from legitimate environmental science and promote more respectful debate instead of dismissing justified skepticism as denial," the avid environmentalist said. "Good conservation science has helped the recovery of gray whales, bald eagles, walruses and polar bears. The scare tactics used by climate alarmists are misdirecting our conservation efforts and causing a backlash against environmentalists. I hope the book demonstrates what good environmental stewardship really entails."
Posted by MS at 8:09 PM