A paper published today in Science is devastating to anthropogenic climate alarm, finding reconstructed Pacific Ocean heat content has been significantly higher throughout the vast majority of the past ~10,000 years in comparison to the latter 20th century. In addition, according to the comment by the editor of Science, "The findings support the view that the Holocene Thermal Maximum, the Medieval Warm Period, and the Little Ice Age were global events, and they provide a long-term perspective for evaluating the role of ocean heat content in various warming scenarios for the future."

Andrew Revkin at the NYT writes,


"The study finds that the rise in ocean heat (and temperature) in recent decades is far faster than anything seen earlier in the Holocene, the period since the end of the last ice age. But the researchers say that this rise is from a relatively cool baseline. Between 10,000 and 8,000 years ago, at depths between 500 and 1,000 meters, the Pacific Ocean was some 2 degrees Celsius (3.6 degrees Fahrenheit) warmer than today for many centuries."

"Warmer than today for many centuries" is an understatement, since the paper shows [Fig 4a below] that the Pacific Ocean from 0-700 meter depth heat content was greater than the latter 20th century for at least ~8,000 years or 80 centuries. For the intermediate depths from 600-900 meters, the reconstructed temperatures [Fig 2d] were higher than the end of the 20th century for about 95% of the past 10,000 years. Figure 4a also shows the only period with less Pacific Ocean heat content than the latter 20th century was during the "relatively cool baseline" during part of the Little Ice Age 1600-1800 AD.

Furthermore, the finding "that the rise in ocean heat (and temperature) in recent decades is far faster than anything seen earlier in the Holocene" spun & hyped by Revkin, Michael Mann, and the media appears to be inconclusive according to the author's statements recorded on video:

Andy Revkin writes- "The study finds that the rise in ocean heat (and temperature) in recent decades is far faster than anything seen earlier in the Holocene, ..."

Actually, that is impossible to conclude from the data in the paper.

Keith DeHavelle transcribed a critical bit from the video and posted it at WUWT.

BRAD: We have fossils that have been bioturbated … we have pretty high accumulation rates, but we don’t have annual resolution .. You could say that we probably have century-scale resolution at best… It’s possible that the sediments just didn’t record similar warmings in the past.”

YAIR: The deep ocean tends to average and smooth the record … I think it’s fair to say that it’s unlikely that very rapid changes on the order of, let’s say, years or even decades … would show up in the record.”

Chris y notes that this statement by the authors "eviscerates any claim of an unprecedented rate of ocean warming in the last 50 years. It is the same shambolic Marcott incident all over again."

Also, the paper uses data for the modern period from Levitus et al, which  finds the world oceans have warmed only 0.09°C over the 55 year period from 1955-2010. An ocean that is 0.09C warmer can only warm the atmosphere by an additional 0.09C. 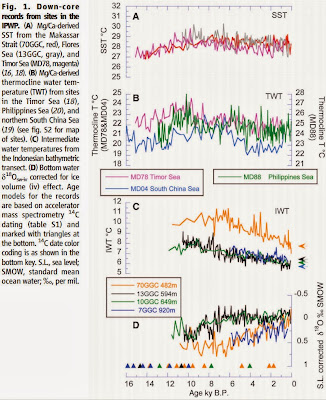 Pacific Ocean Heat Content During the Past 10,000 Years
Yair Rosenthal, Braddock K. Linsley, Delia W. Oppo
Abstract:
Observed increases in ocean heat content (OHC) and temperature are robust indicators of global warming during the past several decades. We used high-resolution proxy records from sediment cores to extend these observations in the Pacific 10,000 years beyond the instrumental record. We show that water masses linked to North Pacific and Antarctic intermediate waters were warmer by 2.1 ± 0.4°C and 1.5 ± 0.4°C, respectively, during the middle Holocene Thermal Maximum than over the past century. Both water masses were ~0.9°C warmer during the Medieval Warm period than during the Little Ice Age and ~0.65° warmer than in recent decades. Although documented changes in global surface temperatures during the Holocene and Common era are relatively small, the concomitant changes in OHC are large.
Related: Mann upset about paper in Science suggesting Medieval Warm Period was global


RealClimate admits doubling CO2 could only heat the oceans 0.002ºC at most