A paper published today in Atmospheric Chemistry and Physics notes that solar UV radiation can vary up to 100% during solar cycles, that it is "well accepted" these large changes in UV significantly affect stratospheric ozone production, and thereby act as a solar amplification mechanism on temperatures.

The IPCC dismisses the role of the Sun in climate change by only modelling the tiny changes of the Total Solar Irradiance [TSI], while ignoring the large changes of up to 100% in the most energetic portion of the solar spectrum, the ultraviolet [UV] region. The UV spectrum also penetrates the deepest of any portion of the solar spectrum into the oceans [up to 100 meters] to heat the bulk of the oceans, unlike longwave infrared radiation from greenhouse gases, which can only penetrate a few millionths of one meter to cause evaporative cooling of the ocean 'skin' surface.

From the Introduction to the paper:

The Sun is the primary source of energy to the Earth’s atmosphere, so it is essential to understand the influence that solar flux variations may have on the climate system. This can be studied by investigating the effect of 11 yr solar flux variations on the atmosphere. Although total solar irradiance (TSI) shows only a small variation ( 0.1% per solar cycle), significant (up to 100 %) variations are observed in the ultraviolet (UV) region of the solar spectrum. In a “top-down” mechanism, these UV changes are thought to modify middle atmospheric (lower mesospheric and stratospheric) O3 [ozone] production, thereby indirectly altering background temperatures (for a review see Gray et al., 2010). These temperature changes can then modulate upward propagating planetary waves, and amplify the solar signal in stratospheric O3 and temperatures. The temperature changes will also affect the rates of chemical reactions which control ozone. This mechanism has been well accepted. 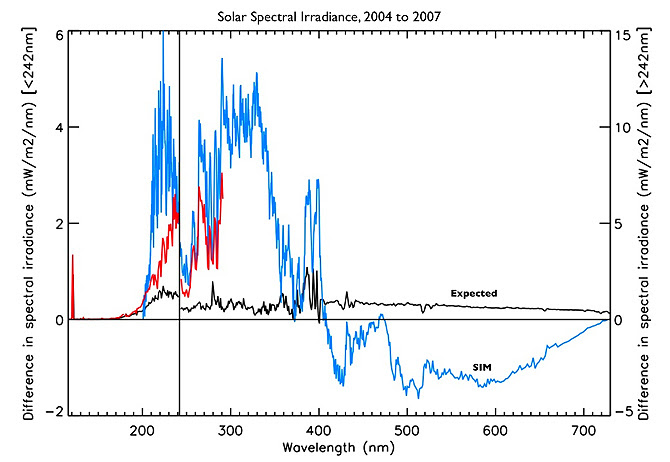