Daniel Yergin: Why OPEC No Longer Calls the Shots

The oil embargo 40 years ago spurred an energy revolution. World production is 50% higher today than in 1973.

WSJ.COM 10/14/13: Forty years ago, on Oct. 17, 1973, the world experienced its first "oil shock" as Arab exporters declared an embargo on shipments to Western countries. The OPEC embargo was prompted by America's military support for Israel, which was repelling a coordinated surprise attack by Arab countries that had begun on Oct. 6, the sacred Jewish holiday of Yom Kippur.
With prices quadrupling in the next few months, the oil crisis set off an upheaval in global politics and the world economy. It also challenged America's position in the world, polarized its politics at home and shook the country's confidence.
Yet the crisis meant even more because it was the birth of the modern era of energy. Although the OPEC embargo seemed to provide proof that the world was running short of oil resources, the move by Arab exporters did the opposite: It provided massive incentive to develop new oil fields outside of the Middle East—what became known as "non-OPEC," led by drilling in the North Sea and Alaska.
The Prudhoe Bay oil field was discovered in Alaska five years before the crisis. Yet opposition by environmentalists had prevented approval for a pipeline to bring the oil down from the North Slope—very much a "prequel" to the current battle over the Keystone XL pipeline. Only in the immediate aftermath of the embargo did a shaken Congress approve a pipeline that eventually added at its peak as much as two million barrels a day to the domestic supply. 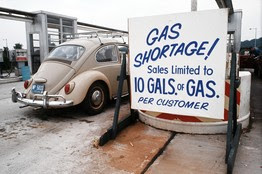 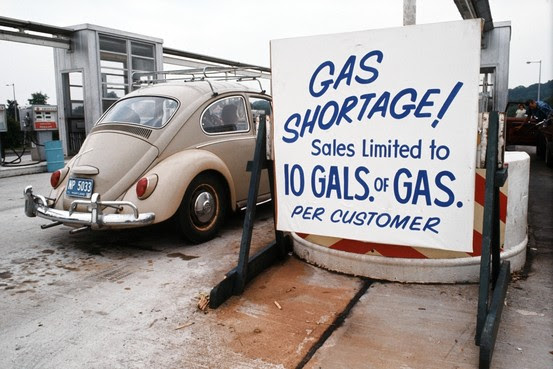 © Corbis
A Connecticut filling station in 1974 amid the oil embargo.
The push to find alternatives to oil boosted nuclear power and coal as secure domestic sources of electric power. The 1973 crisis spawned the modern wind and solar industries, too. By 1975, 5,000 people were flooding into Washington, D.C., for a conference on solar energy, which had been until then only "a subject for eco-freaks," as one writer noted at the time.
That same year, Congress passed the first Corporate Average Fuel Economy standards, which required auto makers to double fuel efficiency—from 13.5 miles per gallon to 27 miles per gallon—ultimately saving about two millions barrels of oil per day. (The standards were raised in 2012 to 54.5 miles per gallon by 2025). France launched a "war on energy waste," and Japan, short of resources and fearing that its economic miracle was at risk, began a drive for energy efficiency. Despite enormous growth in the U.S. economy since 1973, oil consumption today is up less than 7%.
The crisis also set the stage for the emergence of new importers that have growing weight in the global oil market. In 1973, most oil was consumed in the developed economies of North America, Western Europe and Japan—two thirds as late as 2000. But now oil consumption is flat or falling in those economies, and virtually all growth in demand is in developing economies, now better known as "emerging markets." They represent half of world oil consumption today, and their share will continue to increase. Exporting countries will increasingly reorient themselves to those markets. Last month, China overtook the U.S. as the world's largest net importer of oil.
A lasting lesson of the crisis years is the power of markets and their ability to adjust to disruptions, if government allows them to. The iconic images of the 1970s—gas lines and angry motorists—are trotted out whenever some new disruption happens. Yet those gas lines weren't the result of markets. They were the largely self-inflicted result of government interference in markets with price controls and supply allocation. Today, the oil market is much more transparent owing to the development of futures markets.
The 1970s were also years of natural-gas shortages, which turned into a bitter political issue, particularly within the Democratic Party. Many at the time attributed these shortages to geology, but they too were the result of regulation and price controls. What solved the shortages wasn't more controls but their elimination, which resulted in an oversupply that became known as the "gas bubble." Today, abundant natural gas is the default fuel for new electricity generation. The lesson is that markets and price signals can work very efficiently, and surprisingly swiftly, even in crises, if they are allowed to.
There will be future energy disruptions because there is still much political risk around oil. In 2013, the Middle East is still in turmoil, but the alignments are different. In 1973, Iran was one of America's strongest allies in the Middle East. Tehran didn't participate in the embargo and pushed oil into the market. But since the 1979 Islamic revolution, Washington and Tehran have been adversaries. Meanwhile, Saudi Arabia, which was at the center of the 1973 embargo, is now America's strongest Arab ally.
The real lesson of the shock of 1973 and the second oil shock set off by the overthrow of Iran's shah in 1979 is that they provided incentives—and imperatives—to develop new resources. Today, total world oil production is 50% greater than in 1973. Exploration in the North Sea and Alaska was only the beginning. In the early 1990s, offshore production expanded farther out into the Gulf of Mexico, opening up deep water as a new oil frontier. In the late 1990s, Canadian oil sands embarked on an era of growth that today makes them a larger source of oil than Libya before its 2011 civil war.
Most recent is the development of "tight oil," the spinoff from shale gas, which has increased U.S. oil output by more than 50% since 2008. This boom in domestic output increases energy supply, and combined with shale gas has a much wider economic impact in jobs, investment and household income. As these tight-oil supplies increase, and as the U.S. auto fleet becomes more efficient, oil imports have declined. Imports reached 60% of domestic consumption in 2005, but they are now down to 35%—the same level as in 1973.
As the U.S. imports less oil it also produces more to the benefit of energy security. There are several million barrels of oil now missing from the world oil market, owing to sanctions on Iranian oil, disappointments in Iraqi production, and disruptions to varying degrees in Libya, South Sudan, Nigeria and Yemen. The shortfall is being partly made up by Saudi Arabia, which is producing at its highest level.
But the growth in U.S. oil output has been crucial in compensating for the missing barrels. Without it, the world would be looking at higher oil prices, there would be talk of a possible new oil crisis, and no doubt Americans would once again start seeing images of those gas lines and angry motorists from 1973.
Mr. Yergin, vice chairman of IHS, is the author of "The Quest: Energy, Security, and the Remaking of the Modern World" (Penguin Press, 2012).
Posted by MS at 11:54 PM