A new paper published in The Journal of the Geological Society finds great optimism about meeting the 'grand challenge' of global prosperity and 'sustainability' over the next millenium. The author, Cornell professor of earth and atmospheric sciences Dr. Lawrence M Cathles, finds "no major sustainability problems" to "sustain 10.5 billion people for hundreds of centuries."

Cathles' projections show that a "business as usual" scenario would only cause a global temperature increase of about 1.5C over the next 500 years, vs. ~1C if natural gas is substituted for other fossil fuels, vs. ~.6C if an economically-damaging fast transition is made to low carbon energy sources. Thus, only a tiny difference of 0.9C between "business as usual" and an economically-devastating fast switch to renewable energy.

Cathles notes in a prior paper, "The 1.2° (declining to 1°C) warming predicted for the substitute-gas scenario for the 100 year transition is not particularly serious. It is less than the average temperature difference between the latitude of New York City and Boston, for example. It is unlikely we can do much better. The low-carbon-fast scenario is not feasible. The world is not ready for massive nuclear power deployment, and it is unlikely that wind and solar facilities of the scale necessary could be built in 50 years. Time will be required to discover the problems with the large scale deployment of wind and solar facilities, to develop thorium reactors and safer nuclear reactors, and for the public to become comfortable with new solutions."

Or not, says Lawrence M. Cathles, Cornell professor of earth and atmospheric sciences.

"In spite of our apparent environmental problems, we stand a remarkable chance of achieving solutions," he says. "Societies all around the world are living longer. We have more access to food, clean water and energy… and we've never been more healthy."

Cathles outlines his optimism about the world's prospects for sustaining the human population in an environmentally responsible way in his article, "Future Rx: Optimism, Preparation, Acceptance of Risk," in a special publication of The Journal of the Geological Society, released Oct. 24.

"If we have the courage to do big things, all of humanity has a fine future," says Cathles in the article, which addresses food sustainability, natural resources and energy levels, and what he calls the "Grand Challenge" of the next century for everyone to achieve a European standard of living. In his paper, Cathles proposes a path to achieving that standard.

Today the world hosts 7.13 billion people, and Cathles says that while humans are living longer, the world population will peak at 10.5 billion about 100 years from now. The most essential resource is energy, and today most of the world uses less than 2 kilowatts of power per person (for heat, lighting, transportation and manufacturing), while those at the European standard of living (the average French or German citizen, for example) use 3.5 times more. The world currently consumes energy at the rate of 15 trillion watts (15 terawatts), with 86 percent from hydrocarbon sources.

Meeting the Grand Challenge would require energy production of 50 terawatts today and 75 terawatts 100 years from now, ideally all from zero carbon energy sources, says Cathles. Growing from 15 to 75 terawatts over a century requires a growth rate of 1.6 percent per year, which is modest, he says, compared with the U.S. growth rate of 2.6 percent over the past 50 years and China's recent 12 percent growth rate and their planned growth over the next 10 years of 7 percent annually.

The lion's share of the power expansion could be met by wind, solar power produced in deserts or nuclear; but by far the least environmentally intrusive, feasible and realistic option is nuclear, he says. The oceans have enough dissolved uranium to sustain 10.5 billion people at a European standard for more than 100 centuries, and the extraction footprint would be tiny.

The paper also examines whether the supplies of other materials are adequate to sustain 10.5 billion people for hundreds of centuries -- and Cathles sees no major sustainability problems.

Cathles also argues that natural gas provides a natural transition from dependence on other fossil fuels to carbon-free nuclear and other energy sources, although he cautions that the transition cannot be stretched out too much due to oil and gas resource limitations. Our most threatened resource may be soil, he says, but with enough energy this will not be a fundamental barrier to prosperity.

Embracing the challenge of a European standard a century from now is "the most constructive goal imaginable," he says, and one that is necessary for humans to have a future and, more importantly, a common future.

Says Cathles: "We have plenty of resources; we do not need to fight over them."

From a paper by the same author: 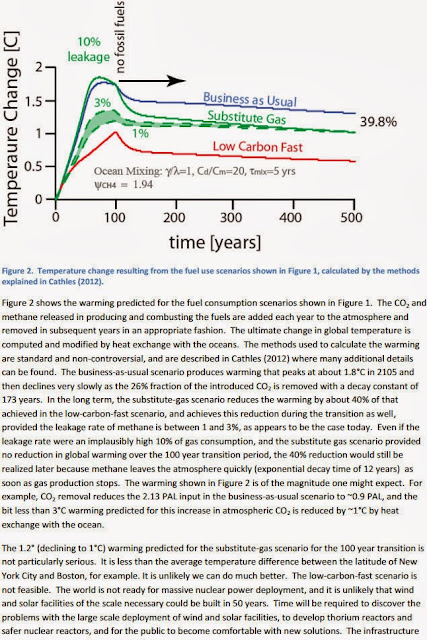