Conservation of Energy
Earth is in the vacuum of space so the only way that the planet can gain or lose energy (excluding nuclear processes) is by electromagnetic radiation. The energy equation applied to the planet is:


Energy IN minus energy OUT = CHANGE in energy stored.

Energy IN is the change, above or below breakeven, of energy acquired by the planet. The hypothesis is made that this energy IN surplus (or deficit) is proportional to the time-integral of the annual average sunspot numbers. Since the average daily sunspot number is reported for each year, the time-integral for a period, obtained by numerical integration (same as ‘running total’), is simply the summation of annual, average daily values for the period.


Radiant energy emitted spaceward from the planet is a function of the time-integral of the fourth power of the global mean absolute temperature. Energy OUT is the amount above or below breakeven. 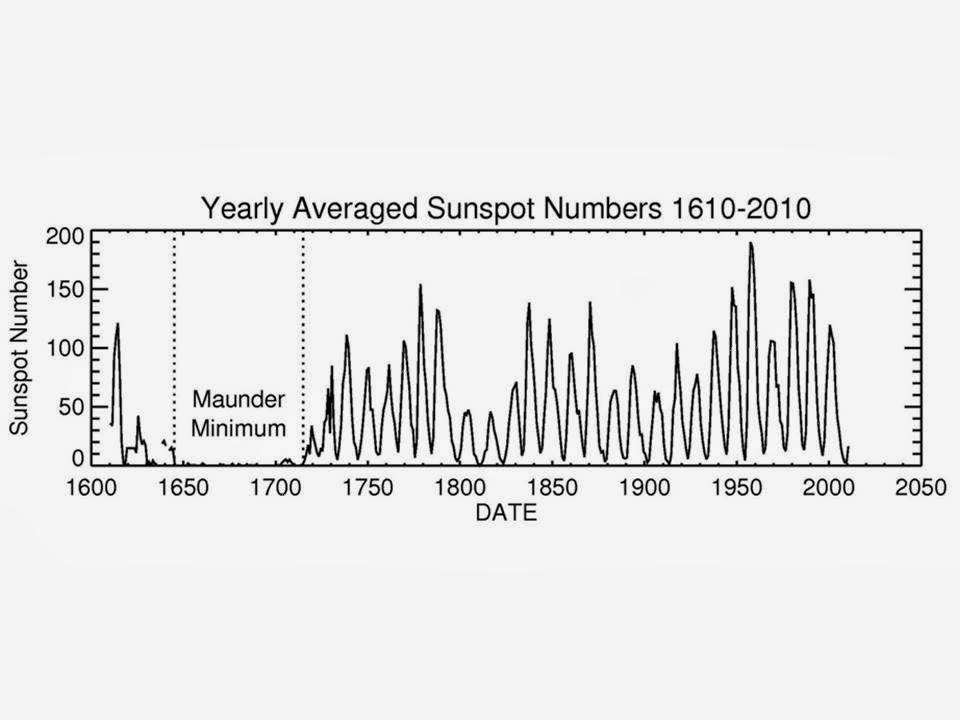 Figure 1. Sunspots have been regularly recorded for over 400years.


An assessment of this is that sunspots are somehow related to the net energy retained by the planet, as indicated by changes to average global temperature. Fewer sunspots are associated with cooling, and more sunspots are associated with warming. Thus the hypothesis is made that the rate at which the planet accumulates (or loses) radiant energy over time is dependent upon the sunspot number to some degree. Hence, changes in the amount of radiant energy retained by the planet above or below breakeven are dependent upon the time-integral of the sunspot numbers.


Radiation from the planet
The radiant energy emitted spaceward from the planet is a function of the time-integral of the fourth power of the global mean absolute temperature, here determined by adding 287.1 K to each reported anomaly as shown in Figure 2 of Reference 4. What is of interest here is the difference, above or below breakeven, which is subtracted from the net IN, above or below breakeven, to determine the energy change.
Combined equation
It is axiomatic that change to the energy retained by the planet is indicated by change to the average temperature of the planet. 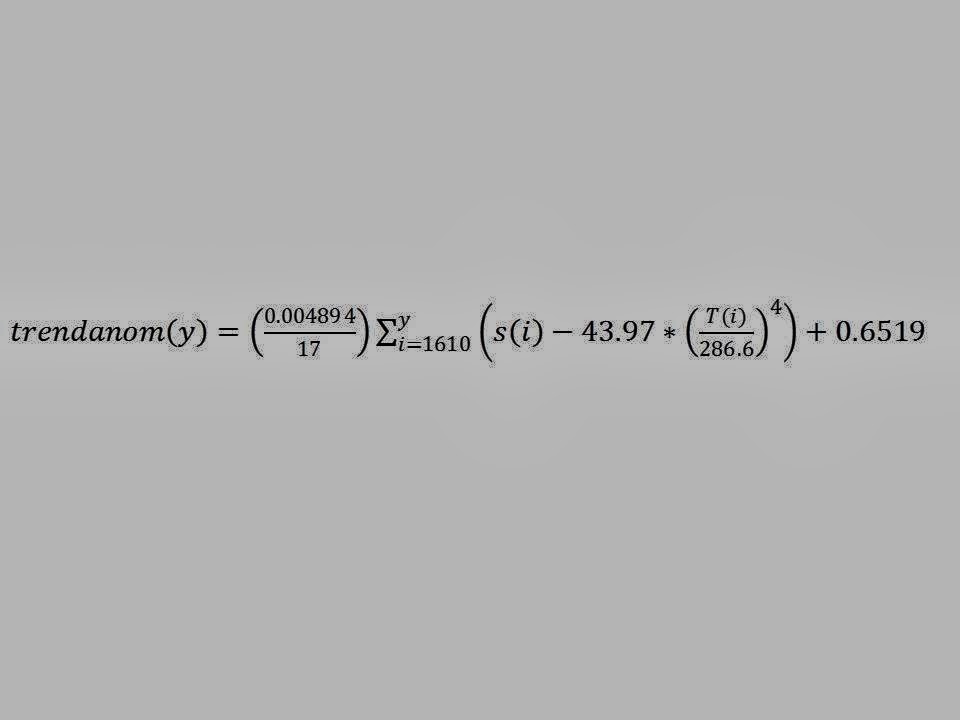 
Trendanom(y) = calculated temperature anomaly trend in year y, K degrees.
0.004894 = the proxy factor, B, from Table 1 in Reference 4, W yr m-2.
17 = effective thermal capacitance of the planet 1, W Yr m-2 K-1
s(i) = average daily Brussels International sunspot number in year i
43.97 = average sunspot number for 1850-1940. (i.e. from the start of AGT reporting to the start of the sustained run up)
286.8 = global mean surface temperature for 1850-1940, K.
T(i) = average global absolute temperature of year i, K,
0.6519 is merely an offset that shifts the calculated trajectory vertically, without changing its shape, so that the calculated temperature anomaly in 2005 is 0.3282 which is the calculated anomaly for 2005 if the ocean oscillation is included minus half of the ocean oscillation range, K degrees.
Sunspot numbers since 1700 are provided numerically 5,6 on the web by NOAA. Recent sunspot numbers are also reported 7. These numerical values are extended back to 1610 using Figure 1 and recorded in an EXCEL file. Figure 2 is a graph of this file. 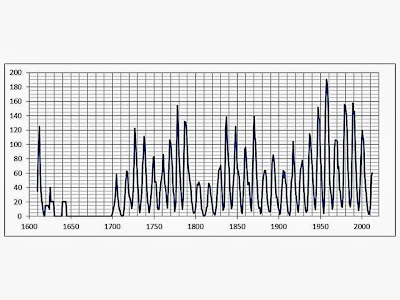 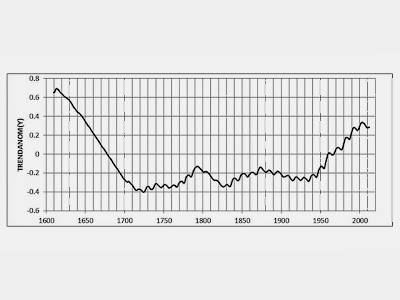 Figure 3: Anomaly trend from just the sunspot number time-integral using Equation (1).
Although average global temperatures were not directly measured in 1610 (no thermometers) or even estimated to sufficient accuracy using proxies, the anomaly that Equation (1) calculates is higher than most estimates for that time. Also, there is no way to determine for sure how much and which way the ocean cycles would influence the value. If the period and amplitude demonstrated to be valid after 1895 is assumed to maintain back to 1621, the temperature in 1621 and 2005 including the influence of ocean cycles would both be 0.2 K higher than calculated by an equation considering only the sunspot number time-integral.
Two changes to Equation (1) reduce the temperature calculated for 1621 by 0.21 K without changing the value calculated  for 2005 (42 replacing 43.97 and 0.4305 replacing 0.6519) are shown in Equation (2).
(2) 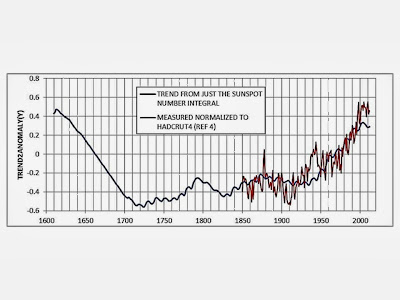 Figure 4: Trend from just the sunspot number time-integral using Equation (2) with superimposed available measured data.
The offset constants were determined so that the temperature anomalies calculated for 2005 by the two equations are identical. The difference in 1909 between Equations (1) and (2) is only 0.055 K which is a small number compared to the accuracy of determination of average global temperature in 1909. Figure 4 shows that temperature anomalies calculated using Equation (2) appear to be somewhat closer to early reported measurements than using Equation (1)
Other assessments
A similar assessment of the influence of the time integral of sunspot numbers9 was made by Jim Goodridge in 2007, using Shove's index of sunspot numbers (calculated from planetary synodic periods) starting before the Maunder Minimum. His findings of the trajectory of the net energy rate are shown in Figure 5. Although his graph states ‘solar irradiance’, it is actually constructed using the time-integral of sunspot numbers from Shove's index with an appropriate scale factor. 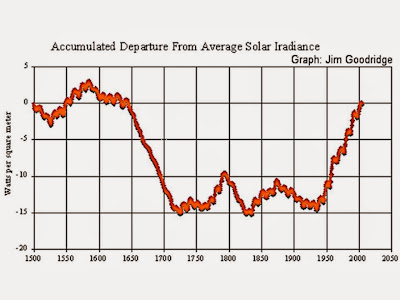 Figure 5: Prior assessments suggest a causative relation between the time-integral of sunspot numbers ("...accumulated departure from the average of all sunspot numbers for the entire 500 year index.") and planet energy gain.


This assessment also used the time-integral of sunspot numbers as a proxy. The energy decline associated with the Little Ice Age, and the energy rise starting in approximately 1940 that led to the Anthropogenic Global Warming theories, are both observed.


Another relevant assessment has been made public at Hockey Schtick 8. Figure 6 was copied from that website by permission. 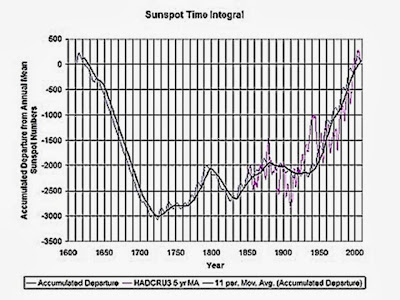 Figure 6: Assessment 8 of the sunspot time-integral overlaid with HadCRUT3 measurements.


Here also the energy decline associated with the Little Ice Age, and the energy rise starting in approximately 1940 that led to the Anthropogenic Global Warming theories, are both observed.


Discussion
Others have looked at only amplitude or only time factors for sunspot numbers and gotten poor correlations with average global temperature. The good correlation comes by combining the two, which is what the time-integral of sunspot numbers does.
Future temperature anomalies depend on future sunspot numbers and future ocean temperature oscillation behavior, neither of which has been confidently predicted for more than a decade or so in advance although assessments using planetary synodic periods appear to be relevant. As shown in Figure 6, the sunspot time-integral has experienced substantial change over the recorded period.


The effective global sea surface temperature oscillation, although dominated by the PDO, depends also on complex phase interaction with lesser oscillations. Considering all this, the effective sea surface oscillation can be expected to fade in and out in its contribution to AGT in future decades. However, average global temperature should continue to correlate with the time-integral of sunspot numbers, as it has ever since sunspots have been regularly recorded.
Conclusions
The time-integral of sunspot numbers alone accurately correlates with the estimated average global temperature trend for the entire period that sunspot numbers have been regularly recorded.


The net effect of ocean oscillations is to cause the surface temperature trend to oscillate above and below the trend calculated using only the sunspot number time-integral. Equation (1) of reference 4 accounts for both and also shows that rational change to the level of atmospheric carbon dioxide has no significant influence.
References:
1.      http://globaltem.blogspot.com/
2.      Sunspot background http://solarscience.msfc.nasa.gov/SunspotCycle.shtml
3.      Historical sunspot numbers,http://solarscience.msfc.nasa.gov/images/ssn_yearly.jpg
4.      http://climatechange90.blogspot.com/2013/05/natural-climate-change-has-been.html
5.   ftp://ftp.ngdc.noaa.gov/STP/SOLAR_DATA/SUNSPOT_NUMBERS/INTERNATIONAL/yearly/YEARLY.PLT
6.    ftp://ftp.ngdc.noaa.gov/STP/SOLAR_DATA/SUNSPOT_NUMBERS/INTERNATIONAL/monthly/MONTHLY
7.      Recent sunspot numbers, http://www.swpc.noaa.gov/ftpdir/latest/DSD.txt
8.      http://hockeyschtick.blogspot.com/2010/01/blog-post_23.html
9.  http://wattsupwiththat.com/2007/11/04/guest-weblog-co2-variation-by-jim-goodridge-former-california-state-climatologist/
Posted by MS at 3:26 PM