Are Typhoon Disasters Getting More Common? No

Are Typhoon Disasters Getting More Common? 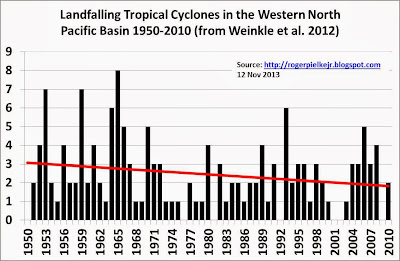 I have recently been engaged in a Twitter debate with Jeff Sachs, of Columbia Earth Institute, motivated by his tweet as follows:

The reference is to a paper by Elsner et al. (2008) in Nature which shows an increase in the strongest tropical cyclones in some basins over the sub-climate time period of 1981-2005. Unfortunately for Sachs that paper does not show trends significant at the >90% level for the strongest cyclones in the western North Pacific basin (the world's most active and where Haiyan occurred). The lesson here is that if you are going to pick cherries, make sure that the fruit is not a lemon.

Fortunately, there is a more relevant study (Weinkle et al. 2012, here in PDF) which looks specifically at landfalls in the western North Pacific basin. Landfalls are of course what cause disasters. The data from that paper for the major landfalling tropical cyclones (i.e., Category 3+) is shown at the top of this post. The trend line is added by Excel, and shows a decline. However, the western North Pacific basin hasbeen shown to exhibit very large variability, so I wouldn't put much weight into any claims of trends up or down (but don't believe me, check IPCC). That said, recent research has looked at the recent decline in activity in that basin.

New paper finds Pacific cyclone activity is at the lowest levels of the past 5,000 years

A new paper finds Pacific cyclone activity is currently at the lowest levels of the past 5,000 years, debunking alarmist claims that Typhoon Haiyan was caused by man
Posted by MS at 8:21 AM