The UN COP19 climate conference public educational materials entitled "Do people have an influence on the climate change?" make the blatantly false claim that "during the last hundred years...the sea level increased for the first time since the last ice age (over 20cm since 1870, and the pace of the increase is getting faster)," thereby implying man is the cause of sea level rise and that the rise is accelerating.

Do people have an influence on the climate change?


Sea levels have been rising naturally for the past 20,000 years since the peak of the last ice age, and at much, much faster rates in the past (up to 40 times faster than today). Sea level rise greatly decelerated about 8,000 years ago to rates similar to today:

Sea levels are currently rising 4 to 8 inches per century, and there is no acceleration, which means there is no evidence of a human influence on sea levels.


References finding either no acceleration or a deceleration of sea level rise during the 20th and 21st centuries:

"no long-term acceleration of sea level has been identified using 20th-century data alone."

Sea level rise is a local, not global, phenomenon:

...the authors find that sea level rise is a localized rather than global phenomenon, with 61 percent of tide gauge records demonstrating no change in sea levels, 4 percent showing a decrease, and a minority of 35 percent showing a rise. This implies relative sea level change is primarily related to subsidence or post-glacial rebound (land height changes) rather than melting ice or steric sea level changes (thermal expansion from warming). Steric sea level rise from thermal expansion turned negative in 2007. Sea levels during the last interglacial were 31 feet higher than the present, and Greenland 8 degrees C warmer than the present, without anthropogenic forcing. There is no evidence suggesting the current interglacial is any different.

The Northern Hemisphere snow cap has been increasing and hit record levels in 2012: 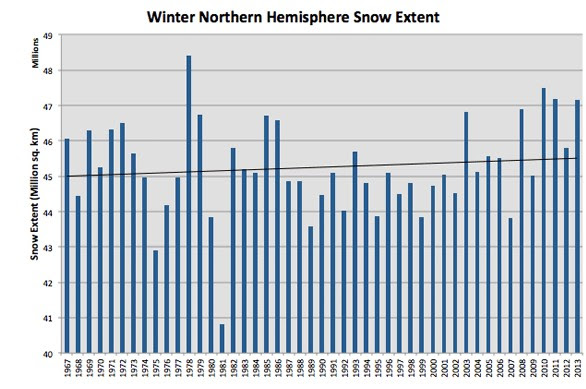 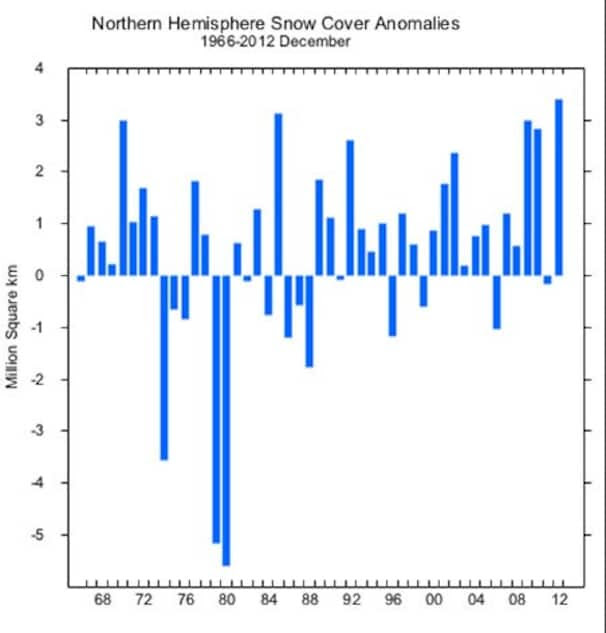 which was the opposite of predictions of the IPCC and its computer models, and a myth that continues to be perpetuated by sites such as "Skeptical Science."