NOAA: 2013 had fewest hurricanes since 1982 and no major hurricanes formed

After confidently predicting that the 2013 hurricane season had only a 5% chance of being a below-normal season, NOAA admits in a press release yesterday that 2013 was much below normal, with the fewest number of hurricanes since 1982, and zero major hurricanes forming in the Atlantic basin.

GOES East satellite tracks Subtropical Storm Melissa, the last storm of the season.
Download here. (Credit: NOAA)
The 2013 Atlantic hurricane season, which officially ends on Saturday, Nov. 30, had the fewest number of hurricanes since 1982, thanks in large part to persistent, unfavorable atmospheric conditions over the Gulf of Mexico, Caribbean Sea, and tropical Atlantic Ocean. This year is expected to rank as the sixth-least-active Atlantic hurricane season since 1950, in terms of the collective strength and duration of named storms and hurricanes.
“A combination of conditions acted to offset several climate patterns that historically have produced active hurricane seasons,” said Gerry Bell, Ph.D., lead seasonal hurricane forecaster at NOAA’s Climate Prediction Center, a division of the National Weather Service. “As a result, we did not see the large numbers of hurricanes that typically accompany these climate patterns.”
Thirteen named storms formed in the Atlantic basin this year. Two, Ingrid and Humberto, became hurricanes, but neither became major hurricanes. Although the number of named storms was above the average of 12, the numbers of hurricanes and major hurricanes were well below their averages of six and three, respectively. Major hurricanes are categories 3 and above.

Suomi NPP satellite peers into Tropical Storm Andrea, the first storm of the season.
Download here. (Credit: NOAA/NASA)
Tropical storm Andrea, the first of the season, was the only named storm to make landfall in the United States this year. Andrea brought tornadoes, heavy rain, and minor flooding to portions of Florida, eastern Georgia and eastern South Carolina, causing one fatality.
The 2013 hurricane season was only the third below-normal season in the last 19 years, since 1995, when the current high-activity era for Atlantic hurricanes began.
“This unexpectedly low activity is linked to an unpredictable atmospheric pattern that prevented the growth of storms by producing exceptionally dry, sinking air and strong vertical wind shear in much of the main hurricane formation region, which spans the tropical Atlantic Ocean and Caribbean Sea,” said Bell. “Also detrimental to some tropical cyclones this year were several strong outbreaks of dry and stable air that originated over Africa.”
Unlike the U.S., which was largely spared this year, Mexico was battered by eight storms, including three from the Atlantic basin and five from the eastern North Pacific. Of these eight landfalling systems, five struck as tropical storms and three as hurricanes.
NOAA and the U.S. Air Force Reserve flew 45 hurricane hunter aircraft reconnaissance missions over the Atlantic basin this season, totaling 435 hours--the fewest number of flight hours since at least 1966.
NOAA will issue its 2014 Atlantic Hurricane Outlook in late May, prior to the start of the season on June 1.

Flashback from NOAA 5/23/13:
2013 Atlantic Hurricane Season Outlook: Summary
NOAA’s 2013 Atlantic Hurricane Season Outlook indicates that an above-normal season is most likely, with the possibility that the season could be very active. The outlook calls for a 70% chance of an above-normal season, a 25% chance of a near-normal season, and only a 5% chance of a below-normal season. See NOAA definitions of above-, near-, and below-normal seasons, which have been slightly modified from previous years. The Atlantic hurricane region includes the North Atlantic Ocean, Caribbean Sea, and Gulf of Mexico.
The 2013 seasonal hurricane outlook reflects a combination of climate factors that have historically produced above-normal Atlantic hurricane seasons. The three main climate factors for this outlook are:
1) The ongoing set of atmospheric conditions that have been producing increased Atlantic hurricane activity since 1995, which includes
2) An expected continuation of above-average sea surface temperatures (SSTs) across the tropical Atlantic Ocean and Caribbean Sea, and
3) A likely continuation of ENSO-neutral conditions (i.e., no El Niño or La Niña); meaning El Niño is not expected to develop and suppress the hurricane season.
This combination of climate factors historically produces above-normal Atlantic hurricane seasons. The 2013 hurricane season could see activity comparable to some of the very active seasons since 1995.
Based on the current and expected conditions, combined with model forecasts, we estimate a 70% probability for each of the following ranges of activity during 2013:
The seasonal activity is expected to fall within these ranges in 70% of seasons with similar climate conditions and uncertainties to those expected this year. These ranges do not represent the total possible ranges of activity seen in past similar years.
Note that the expected ranges are centered well above the official NHC 1981-2010 seasonal averages of 12 named storms, 6 hurricanes, and 3 major hurricanes.

These ranges are well above the seasonal average of 12 named storms, 6 hurricanes and 3 major hurricanes.

“With the devastation of Sandy fresh in our minds, and another active season predicted, everyone at NOAA is committed to providing life-saving forecasts in the face of these storms and ensuring that Americans are prepared and ready ahead of time.” said Kathryn Sullivan, Ph.D., NOAA acting administrator. “As we saw first-hand with Sandy, it’s important to remember that tropical storm and hurricane impacts are not limited to the coastline. Strong winds, torrential rain, flooding, and tornadoes often threaten inland areas far from where the storm first makes landfall.”

US Hurricanes Becoming Much Less Common 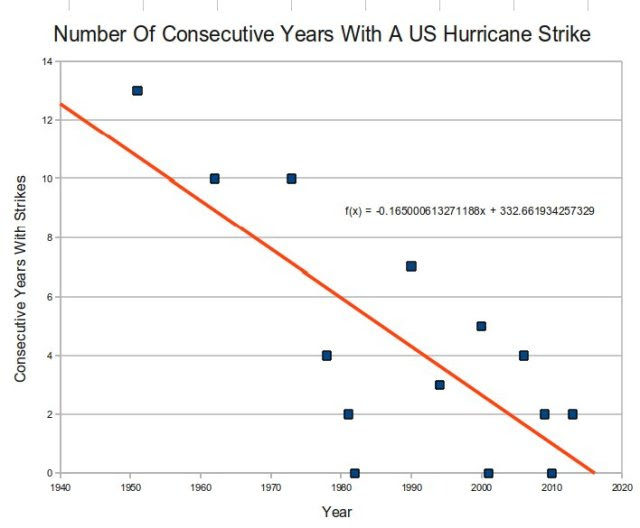 HURDAT Re-analysis Chronological List of All Hurricanes
Posted by MS at 9:43 AM