What is happening to the oceans?

WHAT IS HAPPENING TO THE OCEANS? 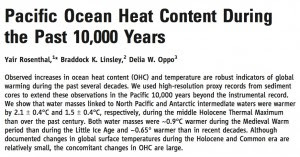 Click on image to enlarge.
New research carried out by and published in the journal Science (University press release) is providing fascinating new insights about how the heat content of the oceans have been changing over the last few thousand years, as well as providing yet more evidence that the Medieval Warm Period and the Little Ice Age were global and not regional events.
The research involves looking for proxy historical data for the temperature of a region of the Pacific in Indonesia. This is regarded as an important stretch of water because it acts as a crossroads between extensive water masses from the northern and southern hemispheres and as such measurements made in one locale represent a much larger volume of ocean.
The work builds on the paper by Oppo et al (2009) in Nature (and see here) that studied the so-called Pacific Warm Pool – the greatest collection of warm water on Earth – and found evidence of the global extent of the Medieval Warm Period and the Little Ice Age.
Understanding how the heat content of the oceans is vital to understanding global climate change. It is believed that most – 90% – of the energy from the Earth’s energy imbalance due to man-made fossil fuels goes into the oceans and not the surface. Hence some scientists have been looking to the ocean depths to find where the energy has gone during the remarkable 16-year long pause in surface temperatures.
The current researchers looked at the isotopic signature (magnesium calcium ratio) found in the remains of shells of a certain species of marine animal – hyalinea balthica. Click on image to enlarge. 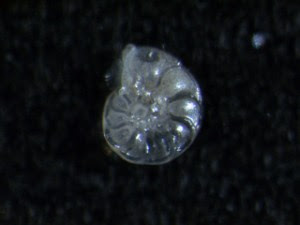 From studies of deposition rates they were able to provide proxy estimates of ocean temperature for various depths for the past 10,000 years – the Holocene.
The top line from this research is that it provides further evidence that the Medieval Warm Period and the Little Ice Age were not events confined to small areas but were global events.
This work also comes to other fascinating conclusions. The temperature of intermediate ocean layers, between 500 and 1000 metres, has in general declined in the last 10,000 years from the early Holocene when ocean temperatures were about 2 deg C higher than they are today. The authors also suggest that the rate of change of ocean heat content (OHC) is greater today than it has been for the past 10,000 years – a claim I will look at more closely.
The problem with the suggestion that OHC is rising faster now than at any time in the Holocene is, as the authors admit, that they have only century-scale resolution of ocean changes in the past. It is possible that similar warming rates were occurring in the past but one cannot say for certain because the ‘signal’ from the deep ocean would be averaged and smoothed over century long periods making it unlikely that changes of decades would appear in the data.
Another interesting point is that this study seems to compliment the data obtained by Marcott et al (2013), or at least the part of Marcott’s data that refers to the Holocene and not the recent data that was tagged onto his dataset. The surprising thing is that Marcott showed fairly steady (slowly declining) land temperatures throughout the Holocene whilst the current study shows deep ocean cooling.
Writing in the Huffington Post Professor Michael Mann – whose ‘hockey stick’ research once eliminated the Medieval Warm Period and the Little Ice Age – considers the scope and limitations of the research. Mann cites the PAGES 2k consortium finding published earlier this year in Nature Geoscience that finds little evidence for a global Medieval Warm Period and Little Ice Age. Mann’s criticisms make for interesting reading and shows that such research is not as settled as many would conclude after reading media reports, especially those who do little more than reproduce the headline in the hyped press release accompanying this research. At the forefront of research into ocean temperatures and heat content there are more questions than answers.
Ten thousand years ago it seems that the OHC was much larger than it is today, and it was declining. During the Medieval Warm Period it was much larger than today (though curiously the ocean temperature was not that much higher) but only a few centuries later – the Little Ice Age of the 17th century – OHC was substantially lower than today. Click on image to enlarge. 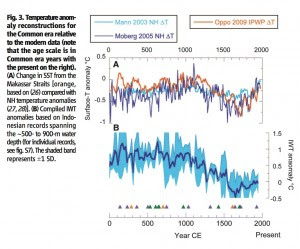 Since then OHC has increased but from a very low base, so that even today it is still below general Holocene levels. Fitting these observations into an anthropogenic scheme will be interesting. Looking at the OHC data from the past two centuries one must ask the question: what is anthropogenic and what is due to the recovery from the Little Ice Age?