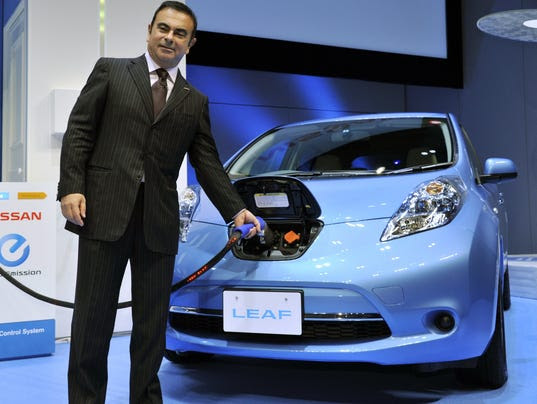 Plug-in electric cars may be cutting-edge technology, but an analysis suggests that most will depreciate more dramatically over five years than their conventional counterparts.

Some of the biggest value gaps involve 2014 models powered only by batteries, entirely without gas engines, according to the analysis performed by Kelley Blue Book at the request of USA TODAY. Examples:

•Chevrolet Spark EV. The little electric is projected to be worth 28% of its $28,305 list price in five years, while a comparable conventional version of the same car will retain 40% of its value.

•Ford Focus Electric. The compact will be worth 20% of its initial $35,995 list price, while a well-outfitted conventional Focus Titanium with an automatic transmission will still command 36%.

•Nissan Leaf. Even the best-selling pure electric car is projected at having a residual value of 15% for the 2013 model. A similar Nissan Sentra SL compact would retain 36%.

"Pure electrics have been slow to catch on in the resale market," says Eric Ibara, director of residual consulting for Kelley Blue Book. Customers "have been willing to buy a new one, not a used electric vehicle."

Indeed, three electric cars — Leaf, Fiat 500e and Smart Fortwo electric — topped the list of models projected by KBB to have the highest depreciation among all cars and trucks for the 2014 model year.

...
As bad as that sounds, there are some mitigating factors. In particular, many buyers are given sales incentives packages and don't pay anywhere near the list price. Some of the biggest discounts come on leases. And many electric cars qualify for a federal tax credit of up to $7,500, plus state or local incentives. Big discounts on new cars hurt residual values.

Plug-in hybrid cars, those with backup gas engines, fair better, KBB reports. For instance, Porsche's new Panamera E-Hybrid has a predicted resale value of 37%, compared with 41% for the conventional model. Toyota's Plug-In Prius has a resale of 35%, only 2 percentage points less than for the conventional version.

Nissan officials note the electric car, or EV, revolution is still in its infancy. The market for used electric cars is yet to develop.

"We expect to see a similar adoption curve for used EVs as we have for new EVs, and we are just now reaching the point where there are used EVs on the market," says Erik Gottfried, director of marketing for Nissan Leaf. "EVs are one of the most active and fast-moving segments of the automotive market."
Posted by MS at 11:05 AM