A paper published today in Nature Climate Change adds the eighth excuse for the 'pause' in global warming: strengthened Pacific trade winds, which according to the authors, were "not captured [simulated] by climate models." On the basis of those same highly-flawed climate models, the authors predict rapid global warming will resume in a decade or so when those trade winds abate.

Trade winds may be a significant cause of the so called global warming pause, according to new research.

An article published online today in Nature Climate Change investigates how strengthened Pacific trade winds can account for 0.1C- 0.2C of cooling through increased subsurface ocean heat uptake - this is enough to account for much of the temperature slowdown in the so called global warming pause.

Global average surface temperatures rose sharply during the second half of the 20th century before leveling off since the late 1990s despite a continuing increase in atmospheric carbon dioxide concentrations. Scientists have yet to fully explain the recent slowdown in the rise of air temperatures attributed to the so called global warming pause that, on at least one measure, has lasted for over 17 years.

Although cool surface waters in the eastern Pacific Ocean have been identified as a key component of this feature, it has so far been unclear how this occurs. The paper published online in Nature Climate Change this week investigates how strengthened Pacific trade winds can account for 0.1–0.2°C cooling — much of the temperature slowdown — through increased subsurface ocean heat uptake.

Matthew England from the University of New South Wales and co-workers used observations and climate models to investigate the impact of increased trade winds on climate.

They showed that when the model is forced by the irregularly strong winds, the sea surface response matches observed trends. The shallow ocean circulation loops are sped up by the intensified winds, causing increased equatorial upwelling of cool waters and the subduction of warm water, or heat drawdown, to the subsurface layer.

They find that around 80% of the surface temperature cooling occurred after 2000, indicating that wind acceleration is a key contributor to the slowdown in warming.

These findings suggest that if the stronger trade winds continue, the slowdown in warming will persist, but if they lessen then there will be a return to rapid warming.


Despite ongoing increases in atmospheric greenhouse gases, the Earth’s global average surface air temperature has remained more or less steady since 2001. A variety of mechanisms have been proposed to account for this slowdown in surface warming. A key component of the global hiatus that has been identified is cool eastern Pacific sea surface temperature, but it is unclear how the ocean has remained relatively cool there in spite of ongoing increases in radiative forcing. Here we show that a pronounced strengthening in Pacific trade winds over the past two decades—unprecedented in observations/reanalysis data and not captured by climate models—is sufficient to account for the cooling of the tropical Pacific and a substantial slowdown in surface warming through increased subsurface ocean heat uptake. The extra uptake has come about through increased subduction in the Pacific shallow overturning cells, enhancing heat convergence in the equatorial thermocline. At the same time, the accelerated trade winds have increased equatorial upwelling in the central and eastern Pacific, lowering sea surface temperature there, which drives further cooling in other regions. The net effect of these anomalous winds is a cooling in the 2012 global average surface air temperature of 0.1–0.2 °C, which can account for much of the hiatus in surface warming observed since 2001. This hiatus could persist for much of the present decade if the trade wind trends continue, however [if the highly-flawed climate models are correct] rapid warming is expected to resume once the anomalous wind trends abate. 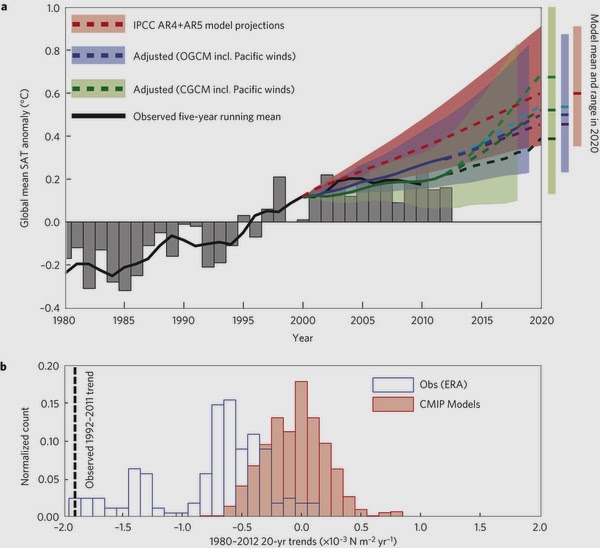 a. Observations are shown as annual anomalies relative to the 1980-2012 mean (grey bars) and a five-year running mean (black solid line). Model projections are shown relative to the year 2000 and combine the CMIP3 and CMIP5 multi-model mean (red dashed line) and range (red shaded envelope). The projections branch o the five-year running mean of observed anomalies and include all simulations as evaluated by the IPCC AR4 and AR5. The cyan, blue and purple dashed lines and the blue shading indicate projections adjusted by the trade-wind-induced SAT cooling estimated by the ocean model (OGCM), under three scenarios: the recent trend extends until 2020 before stabilizing (purple dashed line); the trend stabilizes in year 2012 (blue dashed line); and the wind trend reverses in 2012 and returns to climatological mean values by 2030 (cyan dashed line). The black, dark green and light green dashed lines are as per the above three scenarios, respectively, only using the trade-wind-induced SAT cooling derived from the full coupled model (CGCM). Shading denotes the multi-model range throughout.


Figure 3: Schematic of the trends in temperature and ocean–atmosphere circulation in the Pacific over the past two decades.

Colour shading shows observed temperature trends (°C per decade) during 1992–2011 at the sea surface (Northern Hemisphere only), zonally averaged in the latitude-depth sense (as per Supplementary Fig. 6) and along the equatorial Pacific in the longitude-depth plane (averaged between 5° N–5° S). Peak warming in the western Pacific thermocline is 2.0 °C per decade in the reanalysis data and 2.2 °C per decade in the model. The mean and anomalous circulation in the Pacific Ocean is shown by bold and thin arrows, respectively, indicating an overall acceleration of the Pacific Ocean shallow overturning cells, the equatorial surface currents and the Equatorial Undercurrent (EUC). The accelerated atmospheric circulation in the Pacific is indicated by the dashed arrows; including the Walker cell (black dashed) and the Hadley cell (red dashed; Northern Hemisphere only). Anomalously high SLP in the North Pacific is indicated by the symbol ‘H’. An equivalent accelerated Hadley cell in the Southern Hemisphere is omitted for clarity.
Posted by MS at 11:32 AM