According to a new scaremongering report, "Los Angeles, a metropolis perched on the edge of a coast, can expect to experience sea level rise of as much as two feet due by 2050 due to climate change, according to current projections." 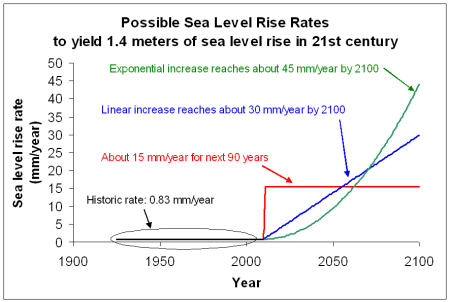 Date:
February 18, 2014
Source:
USC Sea Grant Program
Los Angeles, a metropolis perched on the edge of a coast, can expect to experience sea level rise of as much as two feet due by 2050 due to climate change, according to current projections.
In anticipation, a team from USC partnered with the City of Los Angeles to gauge the impact of the rising tides on local communities and infrastructure. The results, according to a report that was released today, are a mixed bag -- but at-risk assets can be protected by proactive planning and early identification of adaptation measures, according to the report's authors.
"Some low-lying areas within the City's jurisdiction, such as Venice Beach and some areas of Wilmington and San Pedro, are already vulnerable to flooding," said Phyllis Grifman, lead author of the report and associate director of the USC Sea Grant Program. "Identifying where flooding is already observed during periods of storms and high tides, and analyzing other areas where flooding is projected are key elements in beginning effective planning for the future."
Other key findings from the report include:
Residents of low-lying communities, such as San Pedro and Wilmington, as well as those with older buildings and high numbers of renters, such as Venice, would be most affected by flooding. In particular, the Abbot Kinney corridor and the fragile Ballona wetlands are at risk. But the region's wide sandy beaches, if maintained, can provide a valuable bulwark against higher waters, according to the report.
The full report is available on the USC Sea Grant website at http://www.usc.edu/org/seagrant/research/sea_level_rise_vulnerability.html
Posted by MS at 11:13 AM