A new paper published in Earth-Science Reviews finds sea level trends in Australia agree closely with global average sea level rise from tide gauge data of 2 mm/yr [7.9 inches per century] during the period 1966 to 2009. The authors find 69% of the variance in sea level trends related to the natural El Nino Southern Oscillation [ENSO].


"A generalized additive model of Australia’s two longest records (Fremantle and Sydney) reveals the presence of both linear and non-linear long-term sea-level trends, with both records showing larger rates of rise between 1920 and 1950, relatively stable mean sea levels between 1960 and 1990 and an increased rate of rise from the early 1990s." 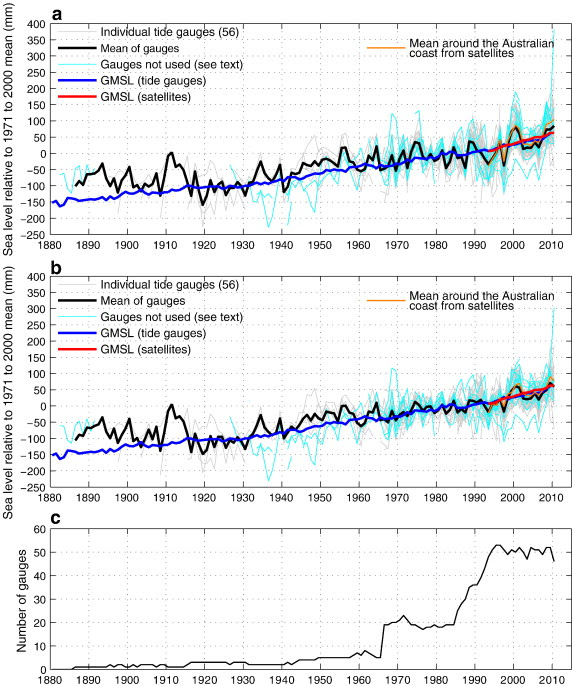 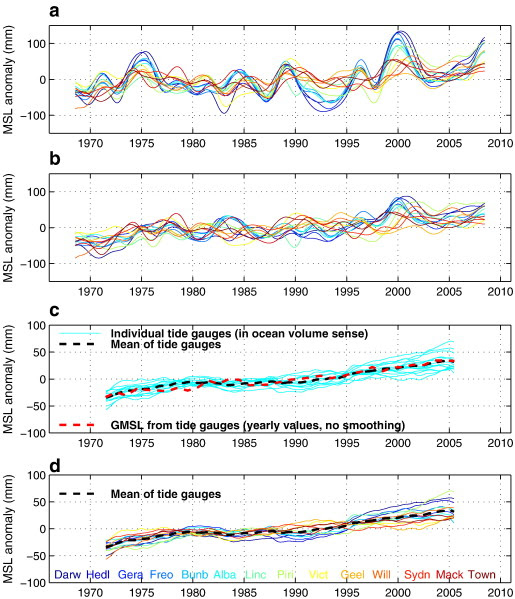 There has been significant progress in describing and understanding global-mean sea-level rise, but the regional departures from this global-mean rise are more poorly described and understood. Here, we present a comprehensive analysis of Australian sea-level data from the 1880s to the present, including an assessment of satellite-altimeter data since 1993. Sea levels around the Australian coast are well sampled from 1966 to the present. The first Empirical Orthogonal Function (EOF) of data from 16 sites around the coast explains 69% of the variance, and is closely related to the El Niño Southern Oscillation (ENSO), with the strongest influence on the northern and western coasts. Removing the variability in this EOF correlated with the Southern Oscillation Index reduces the differences in the trends between locations. After the influence of ENSO is removed and allowing for the impact of Glacial Isostatic Adjustment (GIA) and atmospheric pressure effects, Australian mean sea-level trends are close to global-mean trends from 1966 to 2010, including an increase in the rate of rise in the early 1990s. Since 1993, there is good agreement between trends calculated from tide-gauge records and altimetry data, with some notable exceptions, some of which are related to localised vertical-land motions. For the periods 1966 to 2009 and 1993 to 2009, the average trends of relative sea level around the coastline are 1.4 ± 0.3 mm yr- 1 and 4.5 ± 1.3 mm yr- 1, which become 1.6 ± 0.2 mm yr- 1 and 2.7 ± 0.6 mm yr- 1 after removal of the signal correlated with ENSO. After further correcting for GIA and changes in atmospheric pressure, the corresponding trends are 2.1 ± 0.2 mm yr- 1 and 3.1 ± 0.6 mm yr- 1, comparable with the global-average rise over the same periods of 2.0 ± 0.3 mm yr- 1 (from tide gauges) and 3.4 ± 0.4 mm yr- 1 (from satellite altimeters). Given that past changes in Australian sea level are similar to global-mean changes over the last 45 years, it is likely that future changes over the 21st century will be consistent with global changes. A generalized additive model of Australia’s two longest records (Fremantle and Sydney) reveals the presence of both linear and non-linear long-term sea-level trends, with both records showing larger rates of rise between 1920 and 1950, relatively stable mean sea levels between 1960 and 1990 and an increased rate of rise from the early 1990s.
Posted by MS at 3:32 PM