New paper finds most of Antarctica cooled over the past 1,000 years

The authors find only the relatively small Antarctic Peninsula and a small portion of the southern tip of South America warmed over the past 1000 years:

Climate models, however, predicted anthropogenic global warming to cause the most pronounced warming at both poles, a significant decrease in Antarctic sea ice, and more warming and sea ice loss in Antarctica than the Arctic, all of which are failed predictions. Instead, Antarctic sea ice levels is currently well above the highest recorded levels in history for time of year. 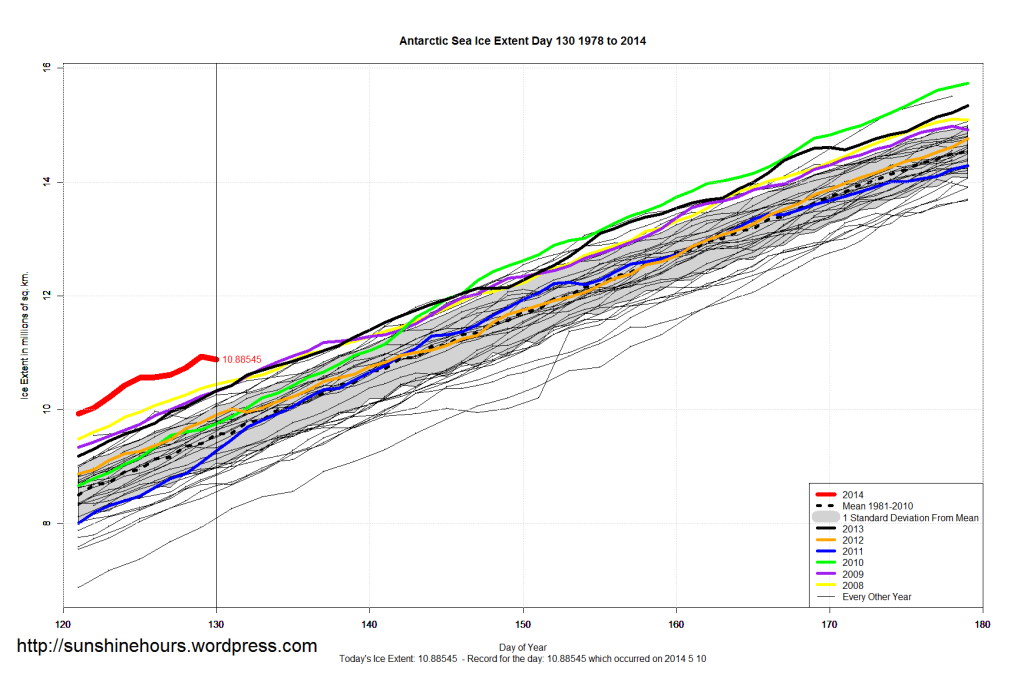 
Warming of the polar regions has global implications for sea-level rise and climate change feedback processes such as decreased planetary albedo and the release of naturally stored carbon reservoirs. High-latitude amplification of global warming trends is clearly observed across the Arctic4, 5. In contrast, Antarctica is the only continental region where long-term cooling over the past 2,000 years has not yet been reversed to climate warming5. Yet some regions of Antarctica have warmed significantly over the past ~50 years, with the Antarctic Peninsula and parts of west Antarctica displaying the most rapid temperature increases in the Southern Hemisphere6, 7. Understanding these regional responses of Antarctic temperature to recent climate change requires an improved characterization of natural and anthropogenically driven changes in Southern Hemisphere climate variability.
Here we use the James Ross Island (JRI) ice core from the northern Antarctic Peninsula7, 8, 9 (64.2° S, 57.7° W; Fig. 1), along with other published temperature-sensitive proxies5, to reconstruct Southern Annular Mode (SAM) variability since AD 1000. The SAM can be defined as the zonal mean atmospheric pressure difference between the mid-latitudes (~40° S) and Antarctica (~65° S; ref 1). The positive phase of the SAM is associated with low pressure anomalies over Antarctica and high pressure anomalies over the mid-latitudes, and this enhanced atmospheric pressure gradient results in strengthening and poleward contraction of the Southern Hemisphere westerly jet stream1. The mountainous geographic barrier of the Antarctic Peninsula makes temperature variability in this region particularly sensitive to the strength of the westerly winds passing through Drake Passage. As such, JRI is a key location for documenting SAM-related climate variability (Fig. 1b) and previous work8, 9 has demonstrated that the water-isotope-derived temperature record from the JRI ice core is significantly correlated with observational indices of the SAM1, 10.

The JRI temperature record since AD 1000 has an inverse correlation with the Past Global Changes 2k network (PAGES2k) reconstruction of continental Antarctic temperature5 (Fig. 1a). This opposing temperature history between the Antarctic Peninsula and the main Antarctic continent is consistent with the spatial response of surface air temperatures to SAM variability (Fig. 1b) and is statistically significant on annual to multidecadal timescales (Table 1). The JRI temperature record also shows similarities to the PAGES2k South American temperature reconstruction5 that may indicate a shared climate forcing, although the positive correlation between the two data sets is not statistically significant (Table 1). However, in their long-term evolution, the South American and JRI reconstructions both indicate that the coolest 50-year interval of the past millennium occurred at AD1410–1460, with progressive phases of warming since that time (Fig. 1a).
Posted by MS at 3:28 PM