from a comment by climate scientist Pehr Bjornbom at the Stockholm Initiative, a Swedish climate science discussion site that is currently discussing the Hockey Schtick post Why Earth's climate is self-regulating and independent of CO2, Dr. Bjornbom notes that in 1888 the famous physicist Maxwell wrote that gravity establishes the temperature gradient [adiabatic lapse rate] of the atmosphere, which is independent of radiative forcing from greenhouse gases and dependent only upon gravity and heat capacity of the atmosphere [lapse rate = -gravity/heat capacity]. Thus, an atmosphere comprised of only non-greenhouse gases such as nitrogen & oxygen [over 99% of Earth's atmosphere] would create a temperature gradient/adiabatic lapse rate/"greenhouse effect" and not be isothermal as claimed by conventional radiative greenhouse proponents.


Maxwell discussed convective equilibrium in his book Theory of Heat, 1888, pp. 330-331:
”The second result of our theory relates to the thermal equilibrium of a vertical column. We find that if a vertical column of a gas were left to itself, till by the conduction of heat it had attained a condition of thermal equilibrium, the temperature would be the same throughout [i.e. isothermal"], or, in other words, gravity produces no effect in making the bottom of the column hotter or colder than the top. This result is important in the theory of thermodynamics, for it proves that gravity has no influence in altering the conditions of thermal equilibrium in any substance, whether gaseous or not. For if two vertical columns of different substances stand on the same perfectly conducting horizontal plate, the temperature of the bottom of each column will be the same ; and if each column is in thermal equilibrium of itself, the temperatures at all equal heights must be the same. In fact, if the temperatures of the tops of the two columns were different, we might drive an engine with this difference of temperature, and the refuse heat would pass down the colder column, through the conducting plate, and up the warmer column; and this would go on till all the heat was converted into work, contrary to the second law of thermodynamics. But we know that if one of the columns is gaseous, its temperature is uniform. Hence that of the other must be uniform, whatever its material.”
[the above paragraph from Maxwell is cited by some to claim it applies to the atmosphere, but as Dr. Bjornbom notes Maxwell goes on to say this assumption does not apply to the atmosphere because of convective equilibrium;]
”This result is by no means applicable to the case of our atmosphere. Setting aside the enormous direct effect of the sun’s radiation in disturbing thermal equilibrium, the effect of winds in carrying large masses of air from one height to another tends to produce a distribution of temperature of a quite different kind, the temperature at any height being such that a mass of air, brought from one height to another without gaining or losing heat, would always find itself at the temperature of the surrounding air. In this condition of what Sir William Thomson has called the convective equilibrium of heat, it is not the temperature which is constant, but the quantity ϕ [entropy], which determines the adiabatic curves.
In the convective equilibrium of temperature, the absolute temperature is proportional to the pressure raised to the power (γ-1)/γ, or 0,29.
The extreme slowness of the conduction of heat in air, compared with the rapidity with which large masses of air are carried from one height to another by the winds, causes the temperature of the different strata of the atmosphere to depend far more on this condition of convective equilibrium than on true thermal equilibrium.”

also referred to as the Poisson relation based on the ideal gas law & 1st law, which shows remarkable agreement with the gravito-thermal "greenhouse effect" found on all the planets with thick atmospheres [fig 5 & 6 below]: 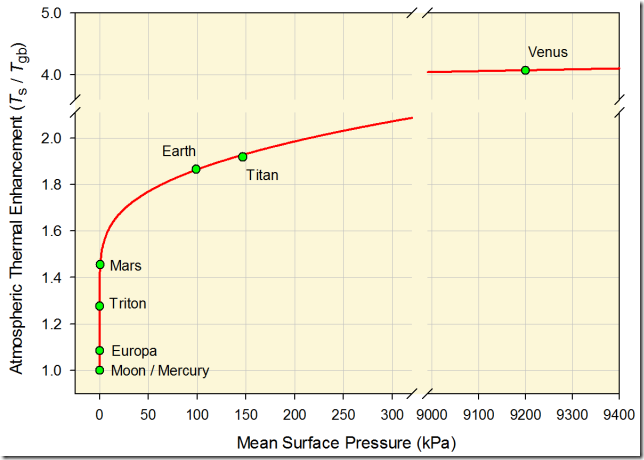 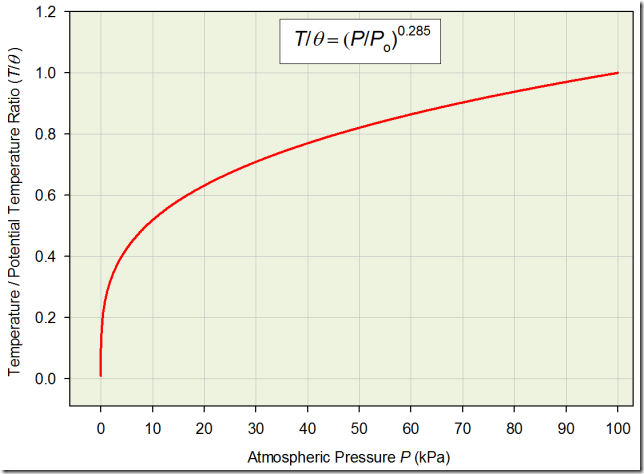 Figure 6. Temperature/potential temperature ratio as a function of atmospheric pressure according to the Poisson formula based on the Gas Law (Po = 100 kPa.). Note the striking similarity in shape with the curve in Fig. 5.
Derivation from the first law of thermodynamics and ideal gas law [EQ 4] shown here: 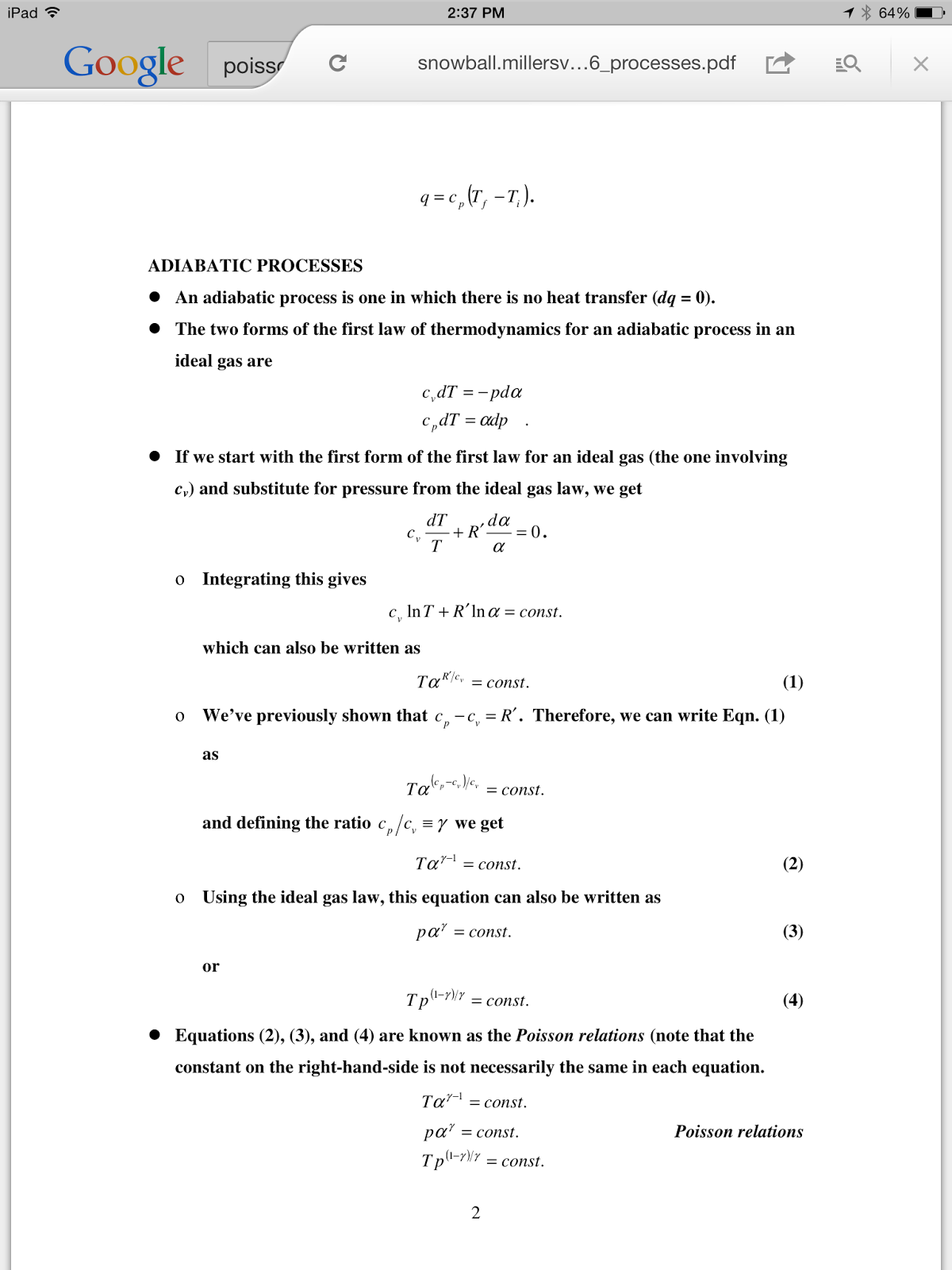 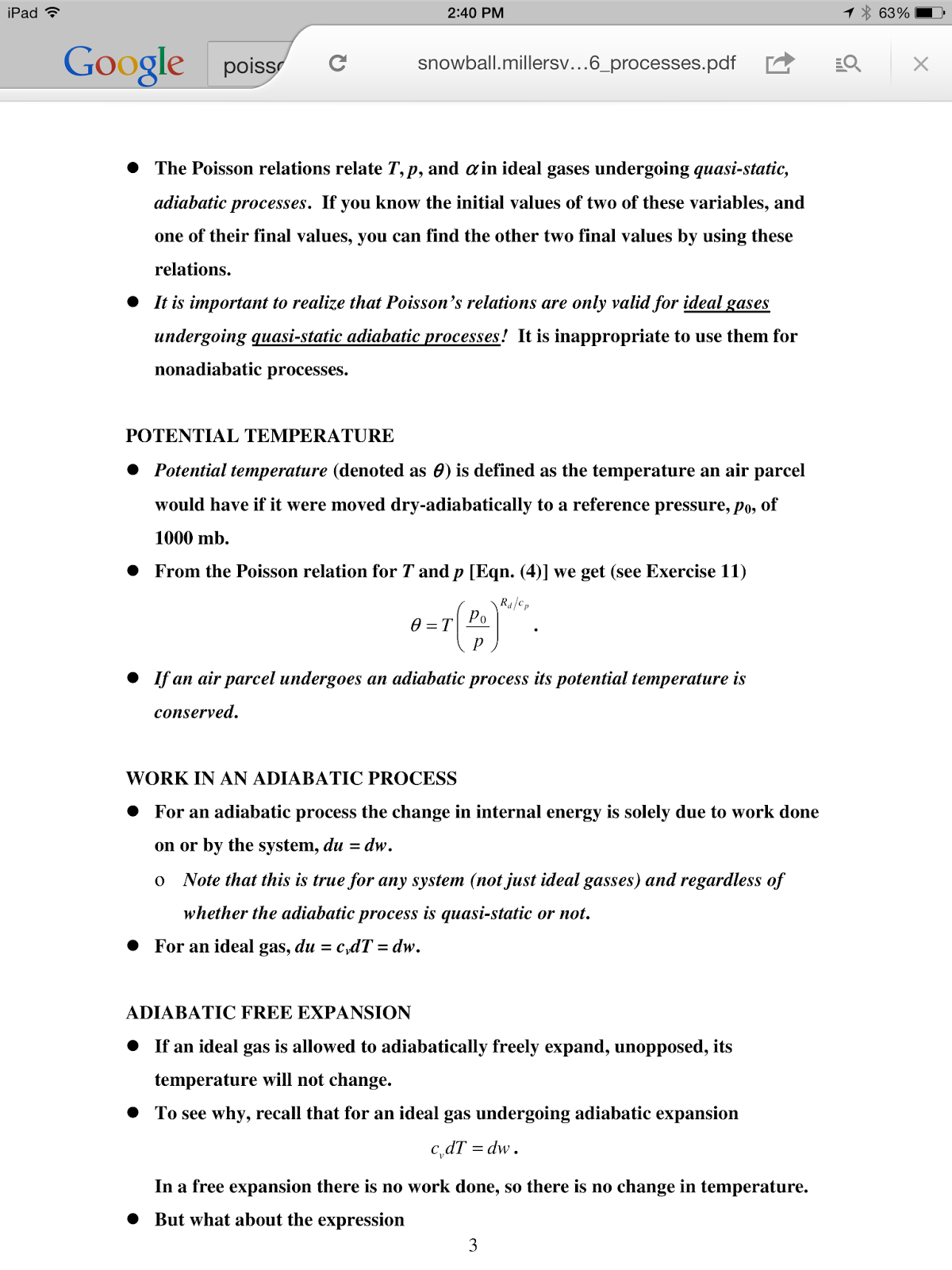