A paper published today in Climate Dynamics finds that clouds have a large net negative feedback cooling effect on the Earth and atmosphere. However, all current IPCC models adopt net positive feedbacks for water vapor and clouds, and this false assumption may account for a large portion of the exaggerated warming models project: 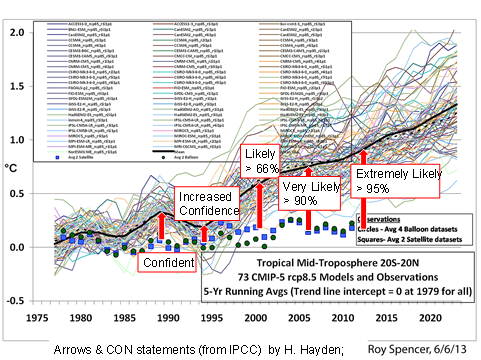 According to the authors, "A large degree of uncertainty in global climate models (GCMs) can be attributed to the representation of clouds and how they interact with incoming solar and outgoing longwave radiation." The paper finds "The averaged SW [shortwave from the Sun], LW [longwave IR from the Earth], and net CRFs [total cloud fractions] from CERES EBAF are −50.1, 27.6, and −22.5 Wm−2, respectively, indicating a net cooling effect of clouds on the TOA [top of the atmosphere] radiation budget."

By way of comparison, the net cooling effect from clouds of -22.5 W/m2 at the top of the atmosphere is about 6 times greater than the assumed radiative forcing from a doubling of CO2 levels of 3.7 W/m2.

"The most obvious way for warming to be caused naturally is for small, natural fluctuations in the circulation patterns of the atmosphere and ocean to result in a 1% or 2% decrease in global cloud cover. Clouds are the Earth’s sunshade, and if cloud cover changes for any reason, you have global warming — or global cooling."

Indeed, the authors of this paper find that " CF [total cloud fraction] is a primary modulator of warming (or cooling) in the atmosphere" and that the net effect of more clouds produces a net negative-feedback cooling effect.

A large degree of uncertainty in global climate models (GCMs) can be attributed to the representation of clouds and how they interact with incoming solar and outgoing longwave radiation. In this study, the simulated total cloud fraction (CF), cloud water path (CWP), top of the atmosphere (TOA) radiation budgets and cloud radiative forcings (CRFs) from 28 CMIP5 AMIP models are evaluated and compared with multiple satellite observations from CERES, MODIS, ISCCP, CloudSat, and CALIPSO. The multimodel ensemble mean CF (57.6 %) is, on average, underestimated by nearly 8 % (between 65°N/S) when compared to CERES–MODIS (CM) and ISCCP results while an even larger negative bias (17.1 %) exists compared to the CloudSat/CALIPSO results. CWP bias is similar in comparison to the CF results, with a negative bias of 16.1 gm−2 compared to CM. The model simulated and CERES EBAF observed TOA reflected SW and OLR fluxes on average differ by 1.8 and −0.9 Wm−2, respectively. The averaged SW [shortwave], LW [longwave], and net CRFs [total cloud fractions] from CERES EBAF are −50.1, 27.6, and −22.5 Wm−2, respectively, indicating a net cooling effect of clouds on the TOA [top of the atmosphere] radiation budget. The differences in SW and LW CRFs between observations and the multimodel ensemble means are only −1.3 and −1.6 Wm−2, respectively, resulting in a larger net cooling effect of 2.9 Wm−2 in the model simulations. A further investigation of cloud properties and CRFs reveals that the GCM biases in atmospheric upwelling (15°S–15°N) regimes are much less than in their downwelling (15°–45°N/S) counterparts over the oceans. Sensitivity studies have shown that the magnitude of SW cloud radiative cooling increases significantly with increasing CF at similar rates (~−1.25 Wm−2 %−1) in both regimes. The LW cloud radiative warming increases with increasing CF but is regime dependent, suggested by the different slopes over the upwelling and downwelling regimes (0.81 and 0.22 Wm−2 %−1, respectively). Through a comprehensive error analysis, we found that CF [total cloud fraction] is a primary modulator of warming (or cooling) in the atmosphere. The comparisons and statistical results from this study may provide helpful insight for improving GCM simulations of clouds and TOA radiation budgets in future versions of CMIP.

NCAR scientist admits IPCC may be wrong on clouds, may have a net cooling effect instead of warming

Ten Reasons Why the Man-Made Global Warming Theory is Wrong.