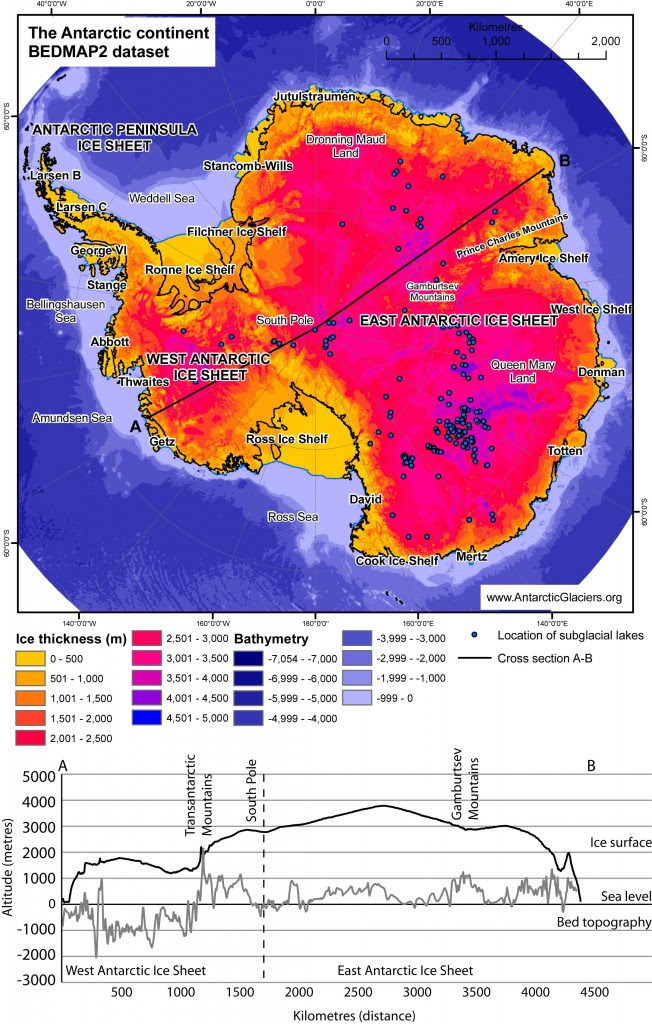 Past evidence of ice sheet collapse

There is some evidence to suggest that, in previous interglacials, the West Antarctic Ice Sheet completely disappeared, leading to sea levels about 5m higher than at present [1].  For example, marine micro-organisms have been found in in glacial sediments at the base of ice cores beneath Ice-Stream B[4]. This occurred during a period of anomalous warmth during MIS 5e in East Antarctica. Evidence from bryozoan and other marine micro-organisms indicates open seaways across West Antarctica at various periods during the last few million years, and even during the past one or more interglacials [3].

Much of West Antarctica drains through the Pine Island Glacier and Thwaites ice streams into Pine Island Bay. These ice shelves are warmed from below by Circumpolar Deep Water[5], which has resulted in system imbalances, more intense melting, glacier acceleration and drainage basin drawdown[6-8]. This is the “Weak Underbelly” of the West Antarctic Ice Sheet[9], which may be prone to collapse. Pine Island Glacier is currently thinning[10], and, combined with rapid basal melting of the Amundsen Sea ice shelves[11], means that there is concern for the future viability of its fringing ice shelves. 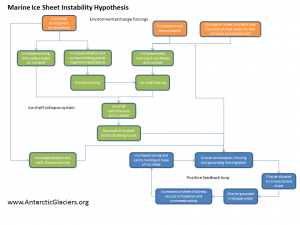 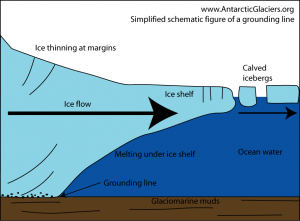 Simplified cartoon of a tributary glacier feeding into an ice shelf, showing the grounding line (where the glacier begins to float).
This could be exacerbated by the removal of fringing ice shelves around the Amundsen Sea sector of the West Antarctic Ice Sheet. Removal of buttressing ice shelves around ice streams tends to result in glacier acceleration, thinning, and grounding line migration[14, 15].
This is a low-probability, high-magnitude event, with a 5% probability of the West Antarctic Ice Sheet contributing 10 mm sea level rise per year within 200 years[16]. The most recent numerical models predict a sea level rise of 3.3 m if this event was to occur[12].
This hypothesis has recently featured prominently in the science news, for example, on the Discovery News.
Posted by MS at 7:58 PM