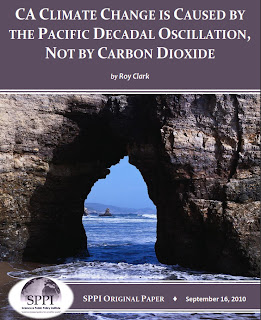 ABSTRACT: The long term trends in monthly minimum temperature from 34 California weather stations have been analyzed. These trends can be explained using a variable linear urban heat island effect superimposed on a baseline trend from the Pacific Decadal Oscillation (PDO). The majority of the prevailing California weather systems originate in the N. Pacific Ocean. The average minimum monthly temperature is a measure of the surface air temperature of these weather systems. Changes in minimum surface temperature are an indicator of changes in the temperature of the tropospheric air column, not the ground surface temperature. The PDO provides a baseline minimum temperature trend that defines the California climate variation. This allows urban heat island effects and other possible anomalous temperature measurement effects to be identified and investigated. Some of the rural weather stations showed no urban heat island effects. Stations located in urban areas showed heat island effects ranging from 0.01 to over 0.04 C.yr-1. The analysis of minimum temperature data using the PDO as a reference baseline has been demonstrated as a powerful technique for climate trend evaluation. This technique may be extended to other regions using the appropriate local ocean surface temperature reference. The analysis found no evidence for CO2 induced warming trends in the California data. This confirms prior ‘Null Hypothesis’ work that it is impossible for a 100 ppm increase in atmospheric CO2 concentration to cause any climate change. 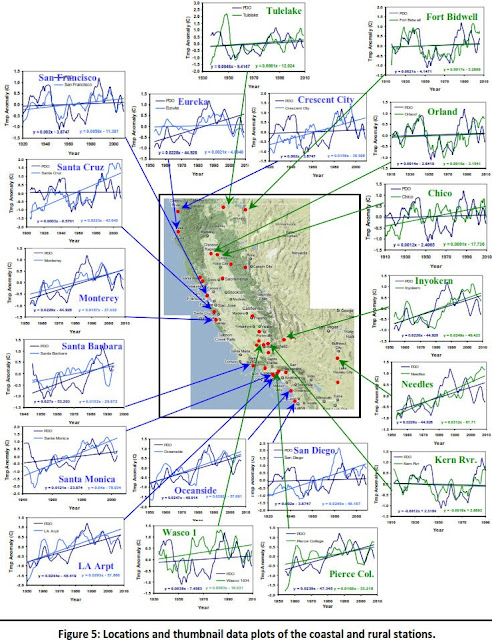 CONCLUSIONS: The dominant factor that determines the climate of the State of California is the variation in N. Pacific Ocean temperatures related to the PDO. This has been clearly demonstrated by an analysis of the long term minimum temperature data from 34 widely spaced California weather stations. The PDO record provides a baseline that can be used to identify urban heat island effects and anomalous data in the station records. This provides a powerful technique for investigating climate change in California and may be extended to other Western States and other areas of the world where there is an ocean influence on the climate that may be used to provide a local reference. Unexplained ‘adjustments’ made to weather station records for use in climate trend analysis have now become a major concern.[7,8] This technique may also provide an independent reference for the analysis of climate trends in weather station data to detect such ‘adjustments’. This analysis used a simple linear fit to the station data. By combining the weather station data with other meteorological data and climate simulations, a more detailed analysis of the effect the PDO and other factors on the climate of the State of California may be performed. However, this is not a ‘one size fits all’ approach and each data set needs to be examined carefully on a case by case basis to evaluate all of the factors that may bias the data. These results also confirm earlier work which demonstrated that it was impossible for the observed changes in atmospheric CO2 concentration to cause any climate change.[2] There is no CO2 ‘signature’ in any of the temperature records that were analyzed. The recent decrease in the PDO with the triple peak ‘signature’ from 1985 onwards is clearly visible in most of the temperature data sets. Predictions for CO2 induced global warming indicate a monotonically increasing ‘equilibrium surface temperature’ for this period. The empirical concept of CO2 induced global warming has no basis in the physical reality of climate change.

Note: Dr. Roy Clark's work on the CO2 'null hypothesis' is incorporated in the post Why greenhouse gases won't heat the oceans
Posted by MS at 9:59 AM