Despite alarmist claims to the contrary, the rate of sea level rise has been decelerating for the past 8000 years. The rate of sea level rise decreased in the latter half of the 20th century, despite an exponential increase in CO2 levels. A further 60% deceleration since 2005 was noted by a paper published in 2009 in Ocean Science and based on satellite data as of June 2008. I have updated the graph from this paper with the latest available data from the University of Colorado (seasonal signal removed, inverse barometer applied): 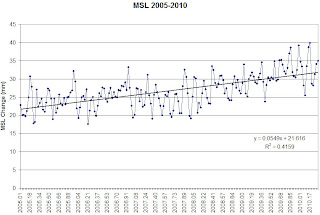 The data shows a global mean sea level rise of only 1.85 mm/year since January 2005, a deceleration of 44% from the prior rate of 3.3 mm/year. At this rate, sea levels will rise 7 inches over the next 100 years. [Note also the bump in 2009-2010 is due to the temporary El Nino conditions] Break out the life rafts!
A new assessment of global mean sea level from altimeters highlights a reduction of global trend from 2005 to 2008

Abstract. A new error budget assessment of the global Mean Sea Level (MSL) determined by TOPEX/Poseidon and Jason-1 altimeter satellites between January 1993 and June 2008 is presented. We discuss all potential errors affecting the calculation of the global MSL rate. We also compare altimetry-based sea level with tide gauge measurements over the altimetric period. This allows us to provide a realistic error budget of the MSL rise measured by satellite altimetry. These new calculations highlight a reduction in the rate of sea level rise since 2005, by ~2 mm/yr. This represents a 60% reduction compared to the 3.3 mm/yr sea level rise (glacial isostatic adjustment correction applied) measured between 1993 and 2005. Since November 2005, MSL is accurately measured by a single satellite, Jason-1. However the error analysis performed here indicates that the recent reduction in MSL rate is real.