Al Gore's blog entry today claims that due to 'deniers' we are losing 'green jobs' to China, by pointing to a NYT.com article about a US company that was able to find venture capital in China [which is another country without cap & trade that has 'failed to take action']. He neglects to mention the looming global warming catastrophe.  He fails to mention the inconvenient truth that solar panels have an energy payback time of 8.7 years and thus are facilities for energy dissipation, and only provide intermittent power generation. He fails to mention that wind power does not reduce CO2 emissions and is also intermittent and impractical. Or that to supply the world with 'clean energy' would require 456,000 square miles of solar panels or 146,000,000 wind turbines covering an area equivalent to 1.5 times the size of the United States.

Every day we fail to take action, we export green jobs and our technological advantage to China. While some deniers claim there are no green jobs, just last week The New York Times pointed to this story:

“With erect posture and clear gray eyes, Chuck Provini still looks like the Marine who graduated from the Naval Academy in 1969 and was repeatedly decorated for bravery in Vietnam.”

“He fumes at strangers who call him a traitor for agreeing to manufacture in Zhuzhou, China, a new solar panel production device that his company developed in the United States.”

“I love my country,” said Mr. Provini, chief executive of 10-employee Natcore Technology in Red Bank, N.J. “It makes me crazy that I’ve got countries that want to do things with us, but not here.”

Is this the best proof he has that we are losing 'green jobs' due to a country that has also 'failed to take action?'

Al: we are 'creating' temporary green jobs here in the USA- just look at these results from the Obama stimulus program: 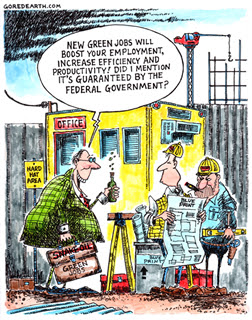 And California's AB32 has created 'green jobs,' at the expense of many more real jobs.

And Al - what was that thing about global warming?
Posted by MS at 2:39 PM