Paper: Current Arctic Sea Ice is More Extensive than Most of the past 9000 Years

A peer-reviewed paper published in the Canadian Journal of Earth Sciences finds that western Arctic sea ice extent at the end of the 20th century was more extensive than most of the past 9000 years. The paper also finds that the western Arctic sea ice extent was on a declining trend over the past 9000 years, but recovered beginning sometime over the past 1000 years and has been relatively stable and extensive since. The paper also demonstrates that even though western annual sea ice extent has been less than the present throughout most of the last 9000 years, low sea ice has consistently failed to cause a planetary albedo 'tipping point' claimed by warmists.

Although it seems like a day doesn't go by without an alarmist headline or blog posting obsessing over the daily Arctic sea ice statistics (and never about Antarctic sea ice extent which reached a record high this year), this paleo-climate perspective takes all the wind out of alarmist sails. Satellite assessment of sea ice conditions is only available beginning in 1979 (around the time the global cooling scare ended), with only sparse data available prior to 1979. The alarmists at the NRDC fraudulently claim in a new video that due to "climate destruction," Arctic sea ice reached the lowest in history in 2010 (actually the low since 1979 was in 2007 and 2010 was the 3rd or 4th lowest depending on the source). Probably wouldn't bring in many donations if they mentioned the truth: the 21st century has some of the highest annual western Arctic sea ice extents over the past 9000 years.

The figure below comes from the paper, but has been modified with the red notations and rotated clockwise. The number of months the sea ice extent is greater than 50% is shown on the y axis. Time is on the x axis starting over 9000 years ago up to the present. Warming periods are shown in gray with the Roman and Medieval warming periods (RWP/MWP) notated, the Minoan Warming Period about 5000 years ago, and another older unnamed warming period. The last dot on the graph is the end of the 20th century and represents one of the highest annual sea ice extents. 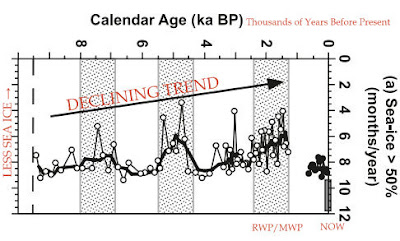 Abstract: Cores from site HLY0501-05 on the Alaskan margin in the eastern Chukchi Sea were analyzed for their geochemical (organic carbon, d13Corg, Corg/N, and CaCO3) and palynological (dinocyst, pollen, and spores) content to document oceanographic changes during the Holocene. The chronology of the cores was established from 210Pb dating of near- surface sediments and 14C dating of bivalve shells. The sediments span the last 9000 years, possibly more, but with a gap between the base of the trigger core and top of the piston core. Sedimentation rates are very high (*156 cm/ka), allowing analyses with a decadal to centennial resolution. The data suggest a shift from a dominantly terrigenous to marine input from the early to late Holocene. Dinocyst assemblages are characterized by relatively high concentrations (600–7200 cysts/cm3) and high species diversity, allowing the use of the modern analogue technique for the reconstruction of sea-ice cover, summer temperature, and salinity. Results indicate a decrease in sea-ice cover and a corresponding, albeit much smaller, increase in summer sea-surface temperature over the past 9000 years. Superimposed on these long-term trends are millennial-scale fluctuations characterized by periods of low sea-ice and high sea-surface temperature and salinity that appear quasi-cyclic with a frequency of about one every 2500–3000 years. The results of this study clearly show that sea-ice cover in the western Arctic Ocean has varied throughout the Holocene. More importantly, there have been times when sea-ice cover was less extensive than at the end of the 20th century.
note this is version 2.0 of this post updated to repeatedly emphasize this drilling site was located in the western Arctic. see comments below for details.
Posted by MS at 10:32 PM