Climate scientist Roger Pielke Sr. has an important post today by meteorologist William DiPuccio on the recent lack of ocean heat accumulation, which concludes, "It is evident that the AGW hypothesis, as it now stands, is either false or fundamentally inadequate. One may argue that projections for global warming are measured in decades rather than months or years, so not enough time has elapsed to falsify this hypothesis. This would be true if it were not for the enormous deficit of heat we have observed. In other words, no matter how much time has elapsed, if a projection misses its target by such a large magnitude (6x to 8x), we can safely assume that it is either false or seriously flawed." 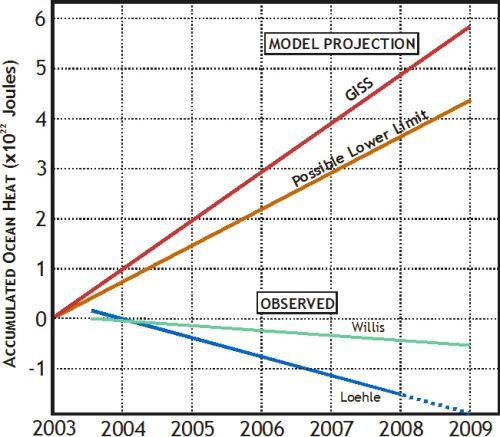 "The current lapse in heat accumulation demonstrates a complete failure of the AGW hypothesis to account for natural climate variability, especially as it relates to ocean cycles (PDO, AMO, etc.). If anthropogenic forcing from GHG can be overwhelmed by natural fluctuations (which themselves are not fully understood), or even by other types of anthropogenic forcing, then it is not unreasonable to conclude that the IPCC models have little or no skill in projecting global and regional climate change on a multi-decadal scale. Dire warnings about “runaway warming” and climate “tipping points” cannot be taken seriously. A complete rejection of the hypothesis, in its current form, would certainly be warranted if the ocean continues to cool (or fails to warm) for the next few years."

"Open and honest debate has been marginalized by appeals to consensus. But as history has often shown, consensus is the last refuge of poor science."