Biodiversity alarmism on the brink

The September 2011 edition of Nature Climate Change claims biodiversity is on the brink and that we "cannot wait for greater certainty in our estimates of extant biodiversity and predictions of its fate." The same article admits we are not even close to being able to measure biodiversity, with only 2 million species identified out of a total of "5.5 million to tens of millions" of species yet to be identified. Furthermore, the article admits "assessing the extent to which regional changes in biodiversity are caused by greenhouse-gas warming has proven particularly intractable, not least because of the need to disentangle the effects of climate change from those of other drivers such as pollution or overexploitation." Nonetheless, the article claims "one in every species could face extinction by 2100 from climate change alone" and that this "startling figure may well be conservative."

This highly-speculative conclusion is based on subdividing each species based upon differences in mitochondrial DNA. In this same sense, one could say "one in the Homo sapiens species could face extinction by 2100," since just like the genome is unique to each human, the DNA of human mitochondria is also highly variable between individuals. For example, a study found biodiversity of mitochondrial DNA between 105 randomly selected Croatians was 95% just based on looking at only 2 regions within the mitochondrial DNA genome itself. The biodiversity of the mitochondrial DNA of other species is also highly diverse and thus, the claim "one in every species could face extinction by 2100" is another example of pseudo-science feeding the alarmist mantra. 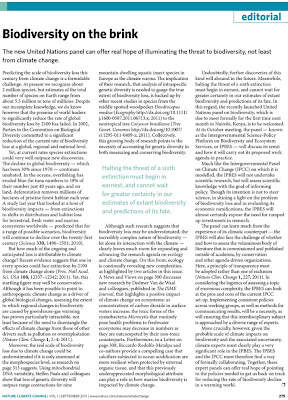