A paper published this week in the journal Geophysical Research Letters finds that changes in the character of El Ninos over the past 31 years are the opposite of the predictions of climate models from greenhouse gases. The paper concludes "A plausible interpretation of these results is that the character of El Niño over the past 31 years has varied naturally" rather than being forced by increased greenhouse gases. Another alarmist prediction by climate modelers crumbles in the face of real-world data. 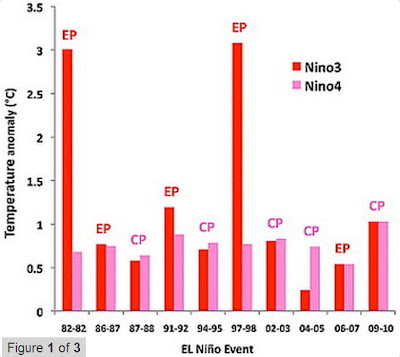 Key Points:
The character of El Nino is changing in ways not expected from climate models
Changes in El Nino are projecting onto background conditions
The changes probably result from natural variations rather than GHG forcing

This paper addresses the question of whether the increased occurrence of central Pacific (CP) versus Eastern Pacific (EP) El Niños is consistent with greenhouse gas forced changes in the background state of the tropical Pacific as inferred from global climate change models. Our analysis uses high-quality satellite and in situ ocean data combined with wind data from atmospheric reanalyses for the past 31 years (1980–2010). We find changes in background conditions that are opposite to those expected from greenhouse gas forcing in climate models and opposite to what is expected if changes in the background state are mediating more frequent occurrences of CP El Niños. A plausible interpretation of these results is that the character of El Niño over the past 31 years has varied naturally and that these variations projected onto changes in the background state because of the asymmetric spatial structures of CP and EP El Niños.
Posted by MS at 10:55 AM