Warmists often claim changes in Arctic sea ice are a consequence of allegedly-anthropogenic global warming. However, a paper published today in the Journal of Geophysical Research finds that "dramatic interannual changes" in Arctic sea ice extent are due to varying storm activity in the months of May-July, which impacts "cloud cover and ice motion, and consequently sea ice melt." The authors find fewer cyclones in the Arctic Ocean "appear to favor a low sea ice area at the end of the melt season." Thus, the alleged connection between AGW and Arctic sea ice extent becomes all the more elusive. 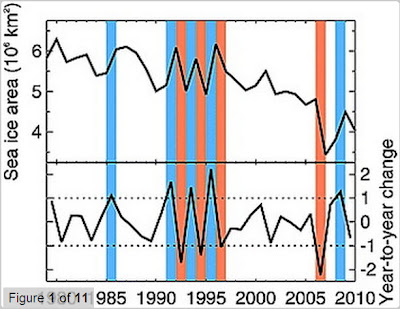 The perennial (September) Arctic sea ice cover exhibits large interannual variability, with changes of over a million square kilometers from one year to the next. Here we explore the role of changes in Arctic cyclone activity, and related factors, in driving these pronounced year-to-year changes in perennial sea ice cover. Strong relationships are revealed between the September sea ice changes and the number of cyclones in the preceding late spring and early summer. In particular, fewer cyclones over the central Arctic Ocean during the months of May, June, and July appear to favor a low sea ice area at the end of the melt season. Years with large losses of sea ice are characterized by abnormal cyclone distributions and tracks: they lack the normal maximum in cyclone activity over the central Arctic Ocean, and cyclones that track from Eurasia into the central Arctic are largely absent. Fewer storms are associated with above-average mean sea level pressure, strengthened anticyclonic winds, an intensification of the transpolar drift stream, and reduced cloud cover, all of which favor ice melt. It is also shown that a strengthening of the central Arctic cyclone maximum helps preserve the ice cover, although the association is weaker than that between low cyclone activity and reduced sea ice. The results suggest that changes in cyclone occurrence during late spring and early summer have preconditioning effects on the sea ice cover and exert a strong influence on the amount of sea ice that survives the melt season.
Posted by MS at 6:36 PM