Climate activist Heidi Cullen told viewers of ABC News this week that recent 'extreme weather' was related to global warming, stating, "When you crank up the heat, when you globally warm the planet, you're going to see more extreme events." What she failed to mention is that the 'extreme weather' is due to La Nina, a cooling of the Pacific Ocean along the equator. Alarmists claim global warming leads to fewer La Ninas, and results instead in a "permanent El Nino" state of warming in the Pacific. This claim has also been repeatedly debunked in the peer-reviewed literature. The claim that warming leads to more extreme events such as storms has also been repeatedly debunked. 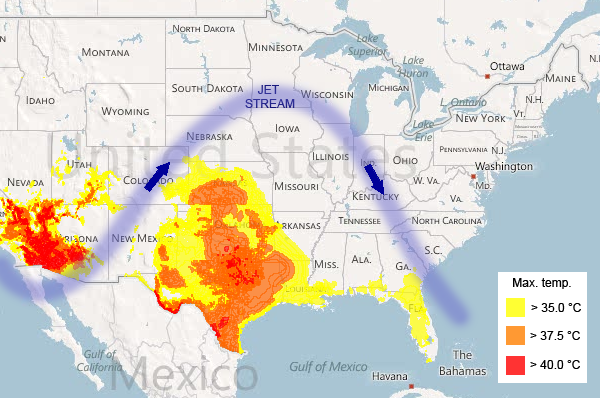 Our map shows the maximum temperatures forecast for today, 16 August. The jet stream is shown schematically.
So far the relentless heatwave scorching Texas has killed numerous crops and dried up the reservoir in San Angelo State Park, leaving a shallow pool of blood-red water teeming with red bacteria that thrive in low oxygen. The drought in Lake Nacogdoches has exposed a piece of the space shuttle Columbia, which broke apart over Texas in 2003. In neighbouring states the heat has warped railroad tracks and exploded sidewalks.
Meteorologists are split on the causes, some blaming a La Niña weather pattern, others a jet stream that's stuck in one place.
In the "little girl" corner, Martin Hoerling of the Earth System Research Laboratory in Boulder, Colorado, says both the extreme heat and drought are largely explained by lingering effects of the most recent La Niña, which lasted from last summer to last spring. During La Niña, the temperature of the ocean's surface along the equator from the middle of the Pacific Ocean to South America is lower than normal, which influences rainfall in the tropics and the movement of tropical storms across the Pacific and into the US.
In 19 out of the past 20 La Niñas, storm clouds moved across the northern US, bypassing Texas and neighbouring states. The result was drought in the southern US, explains Hoerling. In turn, drought pushes temperatures up, because parched soil and the air above it are more vulnerable to overheating.
Hoerling has calculated just how hot and dry Texas has been over the past year compared with historic averages from 1971 to 2000. From 1 October last year to last Sunday, Texas and nearby states were 1.94 ºC hotter than usual and some regions in west Texas had less than a quarter of normal rainfall.
Constipated jet stream
Another possible explanation for the extreme heat is a constipated jet stream, similar to that which triggered floods in Pakistan and fires in Russia last year. [the Russian heat wave from a blocked jet stream has been shown in peer-reviewed research to be due to natural variability, not 'climate change.']
Usually, the jet stream zips around the globe from west to east. Spinning wind currents called Rossby waves continually nudge the jet stream north and south so that it undulates along the way.
Sometimes, Rossby waves become powerful enough to halt the jet stream's flow. The weather systems it carries along become stuck in place, and people below can expect the same weather for days, if not months, on end. These "blocking events" happen in every season all over the world.
Right now, a large high-pressure dome is stuck on top of Texas and nearby states, says Gerald Meehl of the National Center for Atmospheric Research in Boulder, Colorado, bringing clear skies and high temperatures. "Since the air is not going anywhere, it just gets hotter and hotter," he says. Were the jet stream still flowing, it would carry cooler air from the Pacific to replace the hot air that is currently hanging around.
Posted by MS at 9:13 PM