No, this is not a headline from The Onion, it's peer-reviewed science from the experts at NASA and Penn State (home of the Mann):

Aliens may destroy humanity to protect other civilisations, say scientists

Rising greenhouse emissions may tip off aliens that we are a rapidly expanding threat, warns a report for Nasa 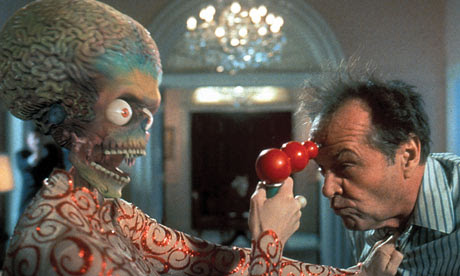 When they see what a mess we've made of our planet, aliens may be forced to take drastic action. Photograph: PR
It may not rank as the most compelling reason to curb greenhouse gases, but reducing our emissions might just save humanity from a pre-emptive alien attack, scientists claim.
Watching from afar, extraterrestrial beings might view changes in Earth's atmosphere as symptomatic of a civilisation growing out of control – and take drastic action to keep us from becoming a more serious threat, the researchers explain.
This highly speculative scenario is one of several described by scientists at Nasa and Pennsylvania State University that, while considered unlikely, they say could play out were humans and alien life to make contact at some point in the future.
Shawn Domagal-Goldman of Nasa's Planetary Science Division and his colleagues compiled a list of plausible outcomes that could unfold in the aftermath of a close encounter, to help humanity "prepare for actual contact".
In their report, Would Contact with Extraterrestrials Benefit or Harm Humanity? A Scenario Analysis, the researchers divide alien contacts into three broad categories: beneficial, neutral or harmful.
Posted by MS at 7:33 PM