US News Poll: 67% think Gore was over the top in his rant on climate skeptics

A US News & World Report poll indicates 67% think Al Gore was over the top or "unhinged" in his rant on 'climate skeptics.'

Was Al Gore Over the Top in His Rant on Climate Skeptics?

Al Gore unleashed his frustration with global warming skeptics Thursday while speaking at an Aspen Institute panel on "Networks and Citizenship." In an angry rant now circulating the Internet, he accused those who doubt man-made climate change of paying "pseudo scientists to pretend to be scientists to put out the message: 'This climate thing, it's nonsense. Man-made CO2 doesn't trap heat.'" He went on to describe other proposed causes of global warming—volcanoes and sun spots—and complete denial of climate change as "bullsh*t." He also said skeptics "polluted" the public discourse and compared them to tobacco companieswho doubted the negative health effects of cigarettes. [See a collection of political cartoons on energy policy.]

Below is an excerpt of Gore's diatribe. For the entirety of his remarks, click here.

His tirade reinvigorates the debate on global warming, which have recently been pushed to the back-burner while the Washington deals with unemployment and the deficit. Opponents of climate change theory took the outburst as an opportunity to call some B.S. of their own and called Gore "unhinged." Supporters have praised the former vice president for calling skeptics out. Nearly everyone is surprised that the former vice president and presidential candidate, once described as "wooden," let out such a passionate and profanity-laced diatribe. 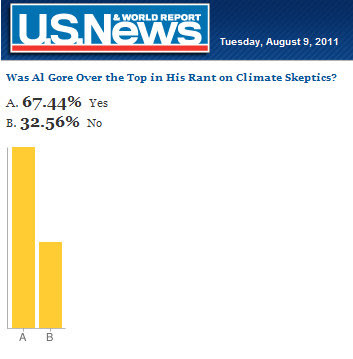