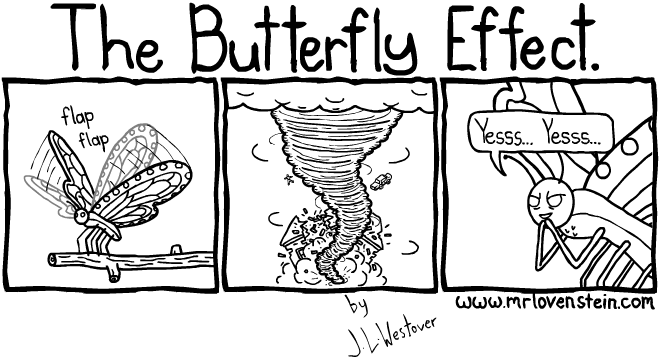 An insightful comment today at Dr. Judith Curry's blog explains why claims that that climate models, unlike weather models, are somehow immune to the initial value problem of chaos theory is a fallacy. The initial value problem of chaos theory explains why models will likely never be able to reliably predict weather beyond 3 weeks, since the initial state of the system is unknown. The initial state of the climate system would include temperature at every location throughout the entire atmosphere, land, and oceans, to mention only one of many variables that will never be known at a single "initial value" in time.

Upon this basis, climate alarmists make the claim that climate models are immune to the initial value problem of chaos theory, claiming climate is instead a simplistic boundary problem, and thus climate models projections can be relied upon a century from now.

The comment by Dan Hughes below explains why this is another popular fallacy about climate models, and thus, why climate models are little more than simplistic computer games:


Dan Hughes | August 2, 2014 at 12:29 pm | Reply
Yet another failed analogy [by warmist Steve Easterbrook, who also believes in the anti-scientific method that models trump observations] that has been invoked to reduce climate process modeling to exceedingly simplistic, and incorrect, terms. The analogy uses the, weather is an initial value problem, climate is a boundary value problem ( BVP ), approach. The boundary value problem argument is invoked so as to ensure us that climate process modeling is very straight-forward relative to numerical weather prediction ( NWP ). One important aspect of the argument is that the chaotic nature seen in NWP does not negatively impact climate calculations. These arguments are attempts to reduce climate process modeling to the steady-state/stationary case.
Here is the concluding paragraph:

The analogy in this case is especially flawed because a very limited fluid flow condition using a “system”, the balloon, that is more correctly described as a problem with a constraint, and not a BVP. The presented argument is meant to ensure us that the boundary conditions for the climate system process modeling solely and completely determine the solution of the IBVP-formulation of the climate process models.
The boundary conditions at the top and bottom of the Earth’s climate systems include specification of the in-coming SW radiative energy from the Sun, plus energy transport considerations at the interfaces between the atmosphere and the material on the surface of the earth. Note that the out-going radiative energy at the top cannot be specified. Note, too, that the energy fluxes at the interfaces at the bottom cannot be specified. These both are calculated by the process models in the GCMs. The out-going radiative energy is an out-come from the process-modeling formulations. In this sense, the boundary condition at the top does not, because it cannot, specify the steady-state/stationary conditions at the top. Relative to energy, the climate systems are an open system.
It is very important to note that the out-going energy is determined by the process models that are used to calculate the states internal to the Earth’s climate system; especially including the energy interactions between the sub-systems of the complete system. The balloon, in contrast, is constrained by the string to which it is attached, and cannot affect through feedback the hydrodynamics of its environment. This constraint, very roughly, maybe is supposed to allow representations of the effects of processes internal to the Earth’s climate systems. In this sense the constraint does not model the important effects of the processes internal to the system that cause changes in the radiative energy balance at the top of the atmosphere.
The BVP assumption requires that balance between in-coming and out-going radiative energy at the top not be affected by the energy exchanges and internal processes that occur within the climate system. I think that the assumption requires that energy exchanges at all the interfaces within the complete system also be in balance. At least to the extent that these processes are not significant relative to the balance at the top. It is difficult for me to
Finally note that, in contrast to the characterization in the final paragraph quoted above, the effects of CO2 in the atmosphere are not boundary conditions at the top of the atmosphere and thus are not altering the boundary conditions. They instead cause effects internal to the systems that are included in the climate process modeling, and these effects alter the radiative-energy transport state at the top. The balloon cannot be an analog for the energy content of Earth’s climate systems.
Finally, really this time, because processes internal to the systems affect states at the boundary of the systems, it is impossible for modeling of Earth’s climate systems to be a BVP in the classic sense of the term for which the conditions at the boundary determine completely the states within the systems.
In addition to the blog post discussed in the above, the concept was presented at a TEDx meeting at the University of Toronto, which is given in this blog post. The presentation is complete with a physical realization of the analogy.
Corrections for incorrectos will be appreciated.
Posted by MS at 1:40 PM