Why does CO2 cool the stratosphere & warm the troposphere? Warmists don't agree on an answer

A paper published today in the Journal of Climate uses "a chemistry-climate model coupled to an ocean model" to arrive at a number of seeming contradictory conclusions about the opposing radiative effects of the greenhouse gases CO2, water vapor, ozone, and halocarbons (CFCs) depending upon the levels in the atmosphere where each of these are present.

Conventional AGW theory proposes the existence of a mid-troposphere "hot spot" and an overlying cooling of the stratosphere because heat is "trapped" in the "hot spot" and therefore can't make it to the stratosphere. However, despite millions of weather balloon and satellite observations over the past 60 years, the "hot spot" has still not been found and thus questions the fundamental theory of anthropogenic global warming climate change. The formation of a "hot spot" would also require a physically impossible reduction of entropy in the mid-troposphere and thus violate the second law of thermodynamics which requires maximum entropy production.

According to the abstract below, the net radiative effect of these greenhouse gases in the troposphere vs. tropopause vs. stratosphere are:

I've been asking CAGW believers for years why CO2 and other greenhouse gases have opposite radiative effects upon global temperatures depending upon where they happen to be located in the atmosphere, and have yet to receive a satisfactory answer. Even the warmists themselves can't seem to agree on this fundamental question underlying CAGW theory. Wikipedia propagandist William Connolley disagrees with Gavin Schmidt and RealClimate on why increased greenhouse gases would cause the stratosphere to cool.

RealClimate links to this site (update: link broken, but this is a mirror site) for their explanation, which upon examination makes no sense, violates basic physics including the 1st and 2nd laws of thermodynamics and maximum entropy production, contains contradictions, and then concludes "We now know that stratospheric cooling and tropospheric warming are intimately connected and that carbon dioxide plays a part in both processes. At present, however, our understanding of stratospheric cooling is not complete and further research has to be done.":

Excerpt in blue text from the site Gavin & RealClimate claim has the definitive answer to the question "why does the stratosphere cool?" [emphasis added]:

UPDATE: See also the German Science Skeptical Blog with a more complete figure of that above showing the atmospheric cooling profile: 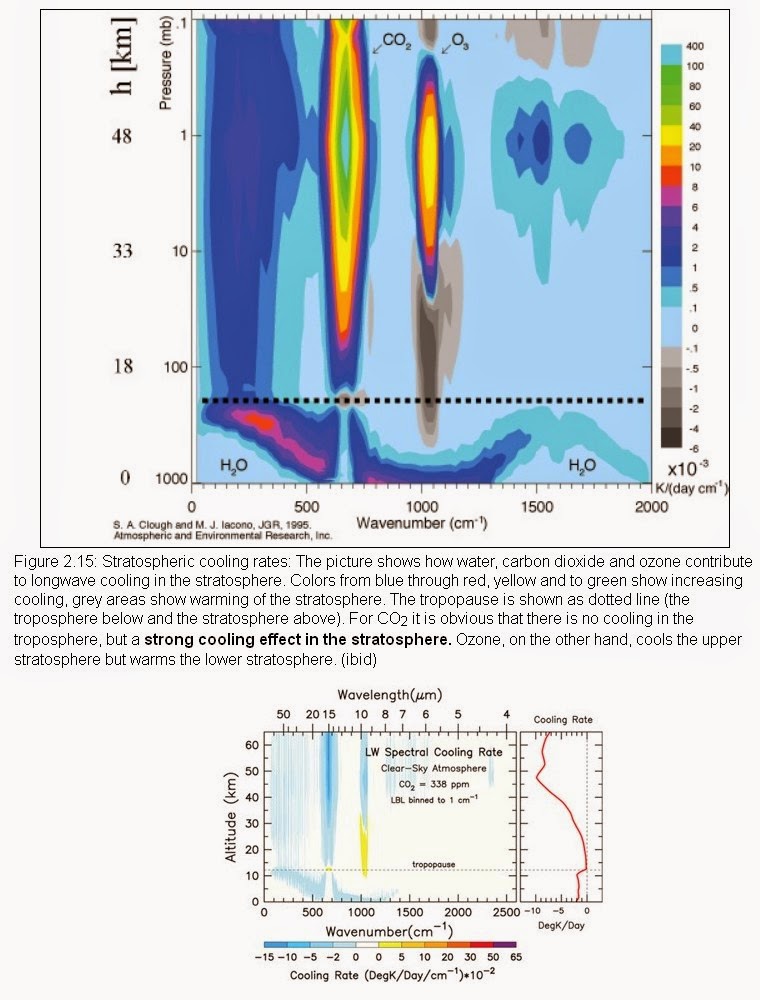