A paper published today in Theoretical and Applied Climatology finds the global monthly temperature anomalies over the past 162 years from 1850-2012 are "surprisingly" "well-described" by a simple mathematical model of fractals with multiple exponents, so-called "multifractals." Multifractals can be used describe complex nonlinear phenomena in the real world, including chaos:

"A multifractal system is a generalization of a fractal system in which a single exponent (the fractal dimension) is not enough to describe its dynamics; instead, a continuous spectrum of exponents (the so-called singularity spectrum) is needed.[1]

Multifractal systems are common in nature, especially geophysics. They include fully developed turbulence, stock market time series, real world scenes, the Sun’s magnetic field time series, heartbeat dynamics, human gait, and natural luminosity time series. Models have been proposed in various contexts ranging from turbulence in fluid dynamics to internet traffic, finance, image modeling, texture synthesis, meteorology, geophysics and more. The origin of multifractality in sequential (time series) data has been attributed, to mathematical convergence effects related to the central limit theoremthat have as foci of convergence the family of statistical distributions known as the Tweedie exponential dispersion models[2] as well as the geometric Tweedie models.[3] The first convergence effect yields monofractal sequences and the second convergence effect is responsible for variation in the fractal dimension of the monofractal sequences.[4]

Could multifractals be another cause for the "pause?" 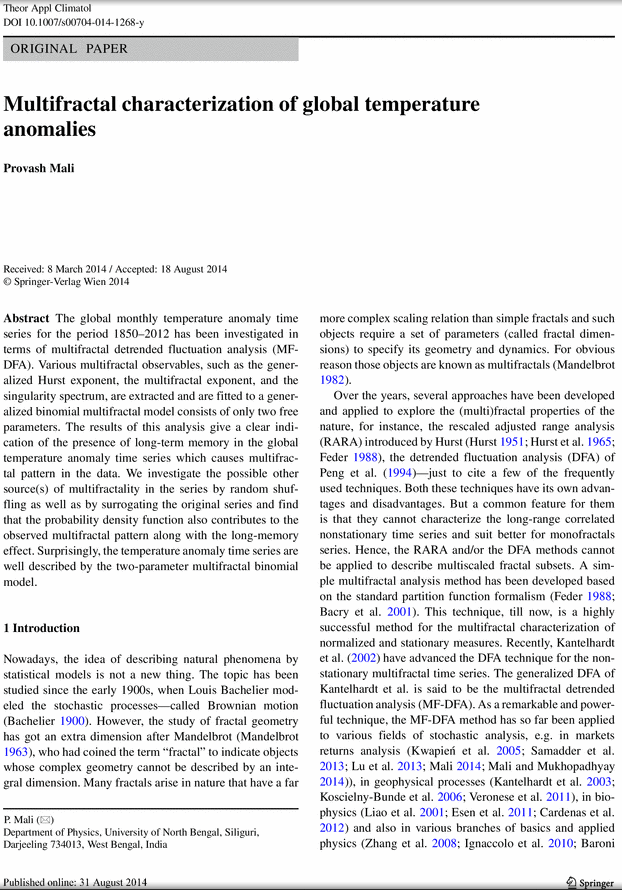