The Ivanpah Solar Electric Generating & Bird-Frying System in California, touted as the world's largest "green energy" solar plant, has recently filed an application with the State of California to increase the carbon pollution emissions it generates from dirty fossil fuels to 94,749 tons of greenhouse gases per year, a 59% increase above the greenhouse emissions currently permitted by California. The plant is requiring much more natural gas to fire its boilers than expected when the Sun doesn't shine & on cloudy days.

As shown by Table 2 below, the proposed new greenhouse [GHGs] emissions are 94,749 tons per year, approximately equivalent to the annual greenhouse gas output of 16,500 average passenger cars: 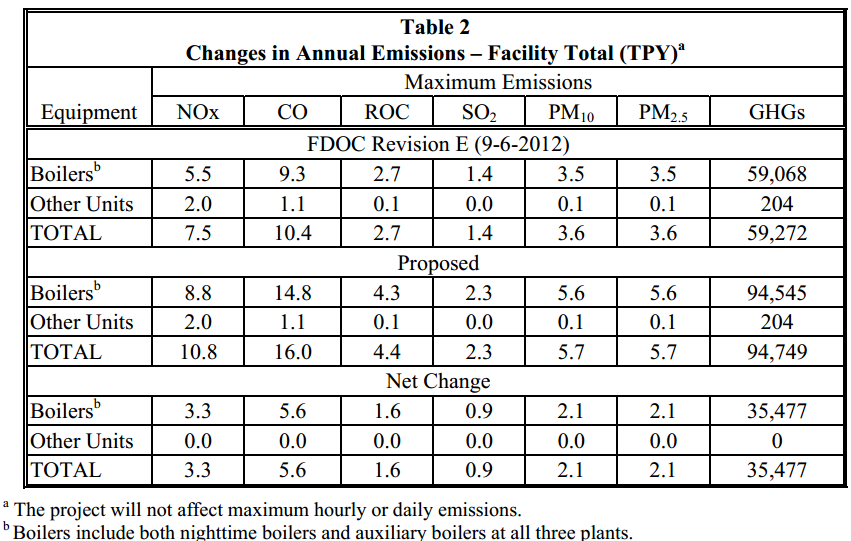 If the petition is approved, the "solar" plant would be allowed to use a quantity of natural gas that would have been enough to supply about 35,000 typical California households. That's 35% of the 100,000 households the entire project is expected to power - generated from fossil fuels!

The plant cost $2.2 billion and has a "gross capacity" of 392 MW [but may actually perform at a much lower average capacity], thus a minimum cost of $5.64 million per MW capacity.

By comparison, A 650MW gas turbine power plant can be built for around $630 million and run 24/7/365 without requiring fossil-fuel back-up, a cost of $970,000 per MW or about 6 times less. Since ~35% of the proposed plant output would be from fossil fuels, the solar maximum capacity would be ~255 MW, increasing the cost for the actual solar-derived energy to ~8.6 times higher than a conventional gas turbine power plant [which has much lower greenhouse & particulate emissions than firing boilers in the Ivanpah plant].

These back-of-the-envelope calculations suggest the Ivanpah 'solar' plant is not only a bird and retina frying machine, but a financial boondoggle with a substantial carbon & environmental footprint as well.

Ivanpah Solar Electric Generating System | Photo: Penny Meyer/Flickr/Creative Commons License
It's been lauded as the world's largest solar power plant, but the Ivanpah Solar Electric Generating System could also be called the world's largest gas-fired power plant (largest as in physical size, not gas consumption). Each of the 4,000-acre facility's three units has gas-fired boilers used to warm up the fluid in the turbines in the early morning, to keep that fluid at an optimum temperature through the night, and to boost production during the day when the sun goes behind a cloud.
The project's managers, BrightSource Energy and NRG Energy, originally estimated that the plant's main auxiliary boilers would need to run for an hour a day, on average, to allow the plant to capture solar energy efficiently. But after a few months of operation, they're now saying they need to burn more gas, with the boilers running an average of five hours a day.
To that end, the companies have asked the California Energy Commission (CEC) to change the project's license to allow Ivanpah to burn more than 1.5 billion cubic feet of gas a year, and the plant's operators say that change won't have any environmental impact.
The request from Ivanpah's operators comes in the form of a petition to amend the plant's air quality conditions of certification, posted Thursday on the CEC's website.
Under its current license, the project is allowed to use up to 328 million standard cubic feet of natural gas (MMSCF) per year at each of its three units. That's with the proviso that the total amount of natural gas used can't climb above 5 percent of the energy the project gets from the sun. Ivanpah's owners (doing business as the shell corporations Solar Partners I, II, and VIII) want that upper limit increased to 525 MMSCF per year per unit, and the 5 percent limit abolished altogether.
If you're wondering about that acronym, MMSCF is a bit of natural gas industry jargon based loosely on Roman numerals, with M meaning 1,000. A standard cubic foot, generally speaking, is the amount of natural gas that would take up a cubic foot of volume at sea level at room temperature.
If the petition is approved, ISEGS would be allowed to use a quantity of natural gas that would have been enough to supply about 35,000 typical California households.
In asking for the changes to the plant's permit, Solar Partners say that they've been climbing a steep learning curve in ISEGS' first months of operation:

ISEGS is unique. For some aspects of operation, the only way to fully understand how the systems work has been through the experience of operating the powerplants. Petitioner first became aware of the need to increase annual fuel use after the completion of construction and commencement of commercial operations, which began in December 2013. The experience gained during commercial operations indicates that more boiler steam would be needed than previously expected in order to operate the system efficiently and in a manner that protects plant equipment, and to maximize solar electricity generation.

Solar Partners says that in order for ISEGS to operate at full efficiency, the plant's gas-fired auxiliary boilers will need to run an average of 4.5 hours a day, rather than the one hour a day originally expected.
To be sure, the amount of natural gas ISEGS would be able to burn under the requested amendments to the plant's license is still dwarfed by the amount a typical gas-fired power plant burns in its normal course of operations. The 1,575 MMSCF (or more than 1.5 billion cubic feet of gas) per year ISEGS would burn at its upper limit would supply a 300-megawatt gas-fired power plant for about 27 days of peak operation.
Still, the boosted gas consumption limits proposed by ISEGS' backers aren't without impact. The plant's total CO2 footprint from burning natural gas would rise to just above 92,200 tons per year, approximately equivalent to the annual greenhouse gas output of 16,500 average passenger cars.
And yet Solar Partners says that the boost from 328 to 525 MMSCF of gas per year -- with a climate impact increase equivalent to about 6,200 of those cars -- will have no significant environmental cost, saying that the boost in gas burning won't change the project's impact on either air quality or public health.
Our guess is that Solar Partners is defining both "air quality" and "public health" differently than we would.
We'll update you on CEC's response to the petition when it becomes available.
Posted by MS at 9:38 AM