A new paper published in Earth System Dynamics finds equilibrium climate sensitivity [ECS] to doubled CO2 levels is 1.8C, about 44% less than claimed by the IPCC AR5 report. The paper adds to at least 36 other peer-reviewed papers finding climate sensitivity to be significantly less than the IPCC mean modelled estimate of 3.2C [range 1.5 - 4.5C].

Excerpt from globalwarming.org: The IPCC’s 2007 Fourth Assessment Report (AR4) estimated a “likely” ECS range of 2°C-4.5°C, with a “best estimate” of 3°C. Since 2011, however, the warming pause and the growing divergence of model predictions and observed global temperatures have been the impetus for several studies finding that IPCC sensitivity estimates are too hot.

Cato Institute scientists Patrick Michaels and Chip Knappenberger maintain a growing list of such studies, which totaled 18 as of February 2014: 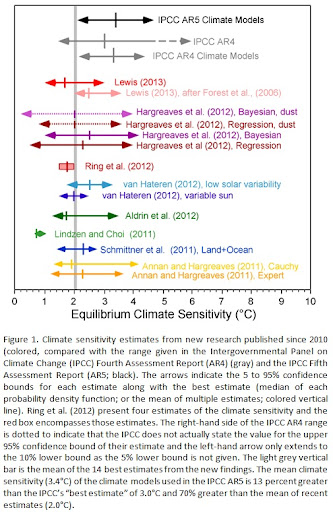 The average sensitivity estimate of the 18 studies compiled by Michaels and Knappenberger is just under 2°C. In other words, the IPCC AR4 “best estimate” of 3°C is 50% higher than the mean estimate of the new studies. That may be why the IPCC’s 2013-2014 Fifth Assessment Report (AR5) declines to offer a “best estimate.”

That small concession, however, does not dispel the growing challenge to consensus climatology. As indicated in the Michaels and Knappenberger chart above, the average sensitivity of the climate models used in AR5 is 3.2°C. That is 60% higher than the mean of recent estimates (< 2°C).

The new paper below finds an ECS of 1.8C, but does not consider natural changes in ocean oscillations, cloud cover, global "brightening" & "dimming," which can alone explain all of the post-1950 warming. The paper also uses long-term ocean heat content [OHC] data as the basis of the ECS calculation, but the OHC trends have been determined to be exaggerated due to sampling biases in a paper published this week. The paper also does not consider the possibility of solar amplification mechanisms, which can explain 95% of climate change over the past 400 years. Consideration of these 4 factors would further lower the ECS estimates significantly.

A description of the paper from the Swedish Stockholm Initiative site is below [Google translation], followed by the abstract and full paper in English.


The Norwegian research team consists of climate scientists and statistical mathematician. They have used every conceivable observations, together with a relatively simple climate model, a so-called energy balance model in which climate sensitivity is one of the input parameter values. They have adjusted the parameter values ​​of the climate model to observations using Bayesian statistics. They were then equilibrium climate sensitivity (ECS = Equilibrium Climate Sensitivity) to 1.8 degrees C (0.9 to 3.2 degrees C with 90% probability) for the doubling of carbon dioxide levels.
The article of Skeie et al. (2014) is published in the geosciences journal Earth System Dynamics.Three of the authors belong climate research center CICERO, University of Oslo, Terje Berntsen ,Gunnar Myhre and Ragnhild Bieltvedt Skeie . The other two authors are statistical mathematician belonging Norsk Regnesentral, Marit Holden and Magne Aldrin .
It inspires confidence that climate scientists here collaborates with statistical mathematician who is proficient in Bayesian statistics . The idea is to use a climate model that includes climate sensitivity as a parameter and to find out the value of climate sensitivity by adapting the model to the observed data. To do this properly with Bayesian statistics needed the expertise of statistical mathematics.
Magne Aldrin (2010) has given a presentation of the methods that they use at a workshop in Cambridge, UK in 2010. The simple climate model is not of the simplest kind, the atmosphere is divided into northern and southern hemispheres. The model ocean is still more complicated and divided into the southern polar ocean, the southern hemisphere's main body, the northern hemisphere's body and the northern polar ocean. The following figure gives an approximate schedule for this climate model (the dimensions listed are only possible examples).