At the "UCLA Hammer Forum on Climate Change" held tonight, the only speakers were warmists Michael Mann and Brenda Ekwurzel, a senior climate scientist for the Union of Concerned Scientists (UCS). Although audio and video recording was prohibited, my notes on a few of the litany of lies in the presentation by Dr. Ekwurzel are below [I'll post separately on Mann's presentation].

Following a 15 minute presentation each by Mann and Ekwurzel, the audience was allowed to ask questions by writing them down on index cards. No verbal questions were permitted from the audience. My question was the only "skeptical" question from the audience of about 150 mostly elderly academics & a few UCLA students, and was directed to Dr. Ekwurzel by the moderator:

Q: Why does satellite data show that global warming has stopped or "paused" for more than 18 years, despite climate models predicting continued warming from increased CO2?

The UCS chief of climate science education, Dr. Ekwurzel, answered the question by denying that there was any "pause" of global warming, falsely claiming that the reason satellite data shows no warming for the last 18 years is that "things were forgotten when the early satellite data was collected," and that after these "forgotten" things were corrected, the satellite data allegedly shows no pause in warming. She claimed that these "forgotten things" included not distinguishing temperatures collected at night vs. daytime, degradation of the sensors on the satellites, and degradation of satellite orbits.

This is blatantly false information. The fact is both the RSS and UAH satellite datasets have corrected for all of these not-forgotten things, and after all of these corrections, still show a clear "pause" of zero warming for 18+ years. The satellites are equipped with laboratory-calibrated platinum resistance thermometers, which have demonstrated stability to thousandths of a degree over many years, and which are used to continuously calibrate the satellite instruments once every 8 seconds, and thus provide far more accurate and complete temperature data than surface thermometer data. In addition, there are over 50 papers published in the climate literature acknowledging the "pause" or "hiatus" of global warming and attempting to explain it, but apparently Dr. Ekwurzel hasn't gotten around to reading any of those. As Dr. Judith Curry notes, "pause denial is getting more and more difficult with time." 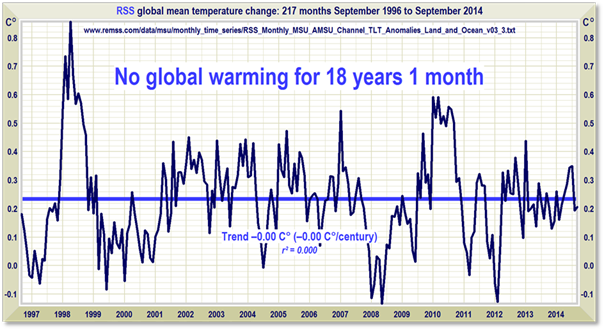 It was difficult keeping up with the additional litany of misrepresentations from Dr. Ekwurzel's presentation, but here are a few:

The presentations were recorded on video by the UCLA Hammer Museum, and hopefully will be posted on the internet soon.
Posted by MS at 10:44 PM