Accumulating evidence debunking  the "other hockey stick" of CO2 levels:

As mentioned in the prior post The Other Hockey Stick - CO2 Levels, the average age of CO2 in ice cores was arbitrarily decreed to be exactly 83 years younger than the ice in which it was trapped. By instead setting the age of CO2 in ice cores to the same age as the surrounding ice, and eliminating noise due to temperature changes (which affect CO2 solubility & using ice core deuterium proxy), the corrected ice core data shows the current CO2 level to be only ~7% higher than the pre-industrial level: 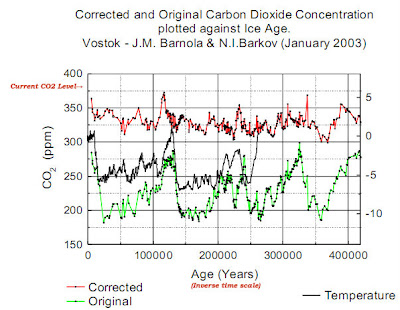 compare this to the CO2 hockey stick (note time scale is in the opposite direction) in the Obama Administration Report "Global Climate Change Impacts on the United States," which claims ice core CO2 never exceeded 300 ppm (above analysis is above 300 ppm throughout the entire record) and that we are currently at CO2 levels 35% higher than pre-industrial levels. It predicts at least doubling to almost tripling of CO2 levels by 2100. Furthermore, see the recent post  showing that at the rate of CO2 increase measured over the past 30 years, CO2 levels would not double until 2244. 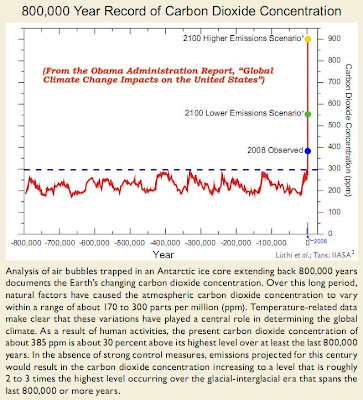 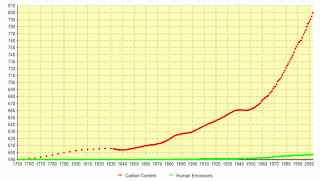 In lockstep with temperature, IPCC scientists needed to show a monotonic increase in CO2 such that the correlation with temperature was apparent at least since 1950/1960.So CO2 records have also been manipulated. One manipulation was the arbitrary changing of the age of the gas trapped in the upper part of an ice core, where the pressure changes were less drastic than in the deeper parts. In the upper part of the core, taken from Siple, Antarctica, the ice was deposited in the year 1890, and the CO2 concentrationin it was 328 ppmv (Friedli et al. 1986, Neftel et al.1985), and not the 290 ppmv needed to prove the man-madewarming hypothesis. The same CO2 concentration of 328ppmv was measured in the air collected directly from the atmosphere at the Mauna Loa volcano, Hawaii, 83 years laterin 1973 (Boden et al. 1990). So, it was shockingly clear thatthe pre-industrial level of CO2 was the same as in the second half of the 20th Century.To solve this “problem,” these researchers simply made an ad hoc assumption: The age of the gas recovered from 1 to 10 grams of ice was arbitrarily decreed to be exactly 83 years younger than the ice in which it was trapped! This was notsupported by any experimental evidence, but only by assumptions which were in conflict with the facts (Jaworowski 1994a,Jaworowski et al. 1992b). The “corrected” proxy ice data were then smoothly aligned with the direct atmospheric measurements

from Mauna Loa. The age of the gas recovered from 1 to 10 grams of ice was arbitrarily decreed to be exactly 83 years younger than the ice in which it was trapped! And so we got corelation! Check out this site http://www.21stcenturysciencetech.com/Articles%202007/20_1-2_CO2_Scandal.pdf
To support the AGW hypothesis, IPCC scientists also dismissed all chemical measures of CO2 which were accurate within 3%.
Posted by MS at 9:17 AM