9000 Years of Decreasing Monsoons in China

One critical flaw of the IPCC appears to be a myopic focus on climate changes within the past century without placing these changes in proper historical context, and then assuming the 20th century changes can not be accounted for by anything other than anthropogenic forcing (i.e. man-made CO2). Time and time again, however, the paleoclimate record shows the 0.6C temperature change of the 20th century to be trivial in comparison to entirely natural changes that have occurred in both directions since the beginning of time. This is a point made by Dr. Richard Lindzen many times. Not only are the temperature changes of the 20th century trivial, but so are other climate indicators including monsoons and droughts. Here are two examples, the first indicating that the strength of Asian Monsoons has shown a declining trend over the past 9000 years: 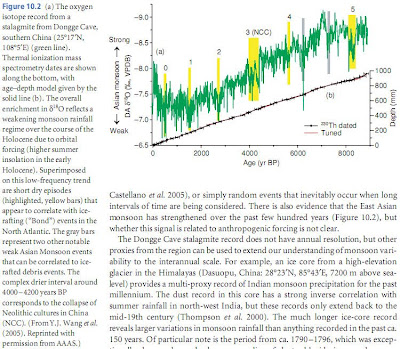 As the earth has warmed since the last ice age 15,000 years ago, the strength of monsoons (and amount of associated vital precipitation) has decreased. The "recent" uptick started about 500 years ago from the low of the past 9000 years, and therefore can not be accounted for by anthropogenic forcing.  What does the IPCC AR4 say about Asian monsoons?:  "An increase in precipitation is projected in the Asian monsoon (along with an increase in interannual season-averaged precipitation variability)." Setting aside that there is no evidence that this is due to man, an increase in monsoonal precipitation appears to be a good thing in historical context. Shown below are records of precipitation for 5 regions covering northern to southern China, with times of severe drought shown as red vertical lines (note absence in the 20th century and lack of "increasing variability"): 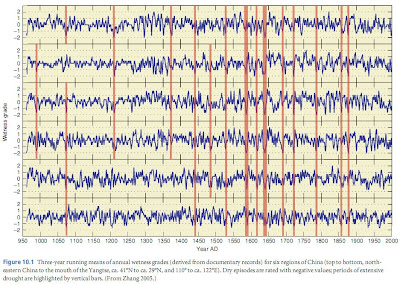 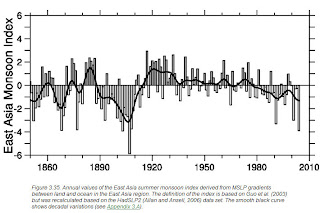 If increasing emissions of CO2 in the 20th century have anything to do with monsoons, why did they peak in the 1880's and 1920's and decrease since then?
Posted by MS at 1:00 PM