Global warming alarmists have been discredited, but you wouldn't know it from the rhetoric this Earth Day.

In mid-November of 2009 there appeared a file on the Internet containing thousands of emails and other documents from the Climatic Research Unit at the University of East Anglia in Great Britain. How this file got into the public domain is still uncertain, but the emails, whose authenticity is no longer in question, provided a view into the world of climate research that was revealing and even startling.
In what has come to be known as "climategate," one could see unambiguous evidence of the unethical suppression of information and opposing viewpoints, and even data manipulation. The Climatic Research Unit is hardly an obscure outpost; it supplies many of the authors for the United Nations' Intergovernmental Panel on Climate Change (IPCC). Moreover, the emails showed ample collusion with other prominent researchers in the United States and elsewhere.
One might have thought the revelations would discredit the allegedly settled science underlying currently proposed global warming policy, and, indeed, the revelations may have played some role in the failure of last December's Copenhagen climate conference to agree on new carbon emissions limits. But with the political momentum behind policy proposals and billions in research funding at stake, the impact of the emails appears to have been small. 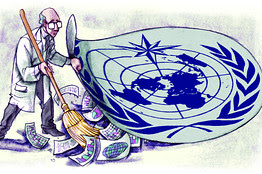 The general approach of the official scientific community (at least in the United States and the United Kingdom) has been to see whether people will bother to look at the files in detail (for the most part they have not), and to wait until time diffuses the initial impressions in order to reassert the original message of a climate catastrophe that must be fought with a huge measure of carbon control.
This reassertion, however, continues to be suffused by illogic, nastiness and outright dishonesty. There were, of course, the inevitable investigations of individuals like Penn State University's Michael Mann (who manipulated data to create the famous "hockey stick" climate graph) and Phil Jones (director of the CRU). The investigations were brief, thoroughly lacking in depth, and conducted, for the most part, by individuals already publicly committed to the popular view of climate alarm. The results were whitewashes that are quite incredible given the actual data.

In addition, numerous professional societies, including the American Society of Agronomy, the American Society of Plant Biologists and the Natural Science Collections Alliance, most of which have no expertise whatever in climate, endorse essentially the following opinion: That the climate is warming, the warming is due to man's emissions of carbon dioxide, and continued emissions will lead to catastrophe.
We may reasonably wonder why they feel compelled to endorse this view. The IPCC's position in its Summary for Policymakers from their Fourth Assessment (2007) is weaker, and simply points out that most warming of the past 50 years or so is due to man's emissions. It is sometimes claimed that the IPCC is 90% confident of this claim, but there is no known statistical basis for this claim—it's purely subjective. The IPCC also claims that observations of globally averaged temperature anomaly are also consistent with computer model predictions of warming.
There are, however, some things left unmentioned about the IPCC claims. For example, the observations are consistent with models only if emissions include arbitrary amounts of reflecting aerosols particles (arising, for example, from industrial sulfates) which are used to cancel much of the warming predicted by the models. The observations themselves, without such adjustments, are consistent with there being sufficiently little warming as to not constitute a problem worth worrying very much about.
In addition, the IPCC assumed that computer models accurately included any alternative sources of warming—most notably, the natural, unforced variability associated with phenomena like El Nino, the Pacific Decadal Oscillation, etc. Yet the relative absence of statistically significant warming for over a decade shows clearly that this assumption was wrong. Of course, none of this matters any longer to those replacing reason with assertions of authority.
Consider a letter of April 9 to the Financial Times by the presidents of the U.S. National Academy of Science and the Royal Society (Ralph Cicerone and Martin Rees, respectively). It acknowledges that climategate has contributed to a reduced concern among the public, as has unusually cold weather. But Messrs. Cicerone and Rees insist that nothing has happened to alter the rather extreme statement that climate is changing and it is due to human action. They then throw in a very peculiar statement (referring to warming), almost in passing: "Uncertainties in the future rate of this rise, stemming largely from the 'feedback' effects on water vapour and clouds, are topics of current research."
Who would guess, from this statement, that the feedback effects are the crucial question? Without these positive feedbacks assumed by computer modelers, there would be no significant problem, and the various catastrophes that depend on numerous factors would no longer be related to anthropogenic global warming.
That is to say, the issue relevant to policy is far from settled. Nonetheless, the letter concludes: "Our academies will provide the scientific backdrop for the political and business leaders who must create effective policies to steer the world toward a low-carbon economy." In other words, the answer is settled even if the science is not.
In France, several distinguished scientists have recently published books criticizing the alarmist focus on carbon emissions. The gist of all the books was the scientific standards for establishing the alarmist concern were low, and the language, in some instances, was intemperate. In response, a letter signed by 489 French climate scientists was addressed to "the highest French scientific bodies: the Ministry of Research, National Center for Scientific Research, and Academy of Sciences" appealing to them to defend climate science against the attacks. There appeared to be no recognition that calling on the funding agencies to take sides in a scientific argument is hardly conducive to free exchange.
The controversy was, and continues to be, covered extensively by the French press. In many respects, the French situation is better than in the U.S., insofar as the "highest scientific bodies" have not officially taken public stances—yet.
Despite all this, it does appear that the public at large is becoming increasingly aware that something other than science is going on with regard to climate change, and that the proposed policies are likely to cause severe problems for the world economy. Climategate may thus have had an effect after all.
But it is unwise to assume that those who have carved out agendas to exploit the issue will simply let go without a battle. One can only hope that the climate alarmists will lose so that we can go back to dealing with real science and real environmental problems such as assuring clean air and water. The latter should be an appropriate goal for Earth Day.
Dr. Lindzen is professor of Atmospheric Sciences at the Massachusetts Institute of Technology.

Related publication by Dr. Lindzen: Climate Science: Is it currently designed to answer questions?
Posted by MS at 6:05 PM