More on the ~60 Year Climate Cycle

The P Gosselin NoTricksZone corresponded with Dr Oleg Pokrovsky, the Russian scientist who was widely quoted by international newswires 4 days ago about his statement that the Arctic is cooling, not warming. Dr. Pokrovsky replied and provided a link to his recent powerpoint presentation. He bases his analysis partly upon the cyclical nature of the AMO and PDO, as shown in his wavelet analyses below. The simplistic explanation for interpretation of the wavelet analysis is to look for dark red horizontal bands, which show the primary cyclical component for both the AMO and PDO to range between ~60-70 years (y axis): 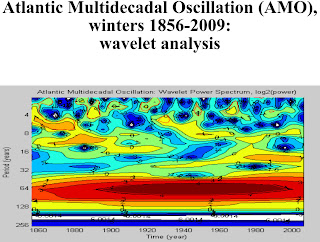 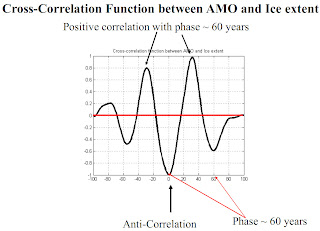 He also finds similar periodicity in the PDO during the instrument era (first graph) and from paleoclimate reconstructions (second graph). 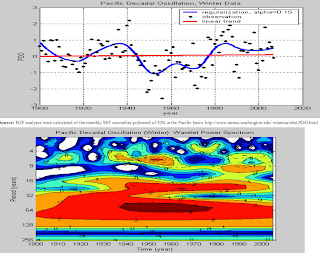 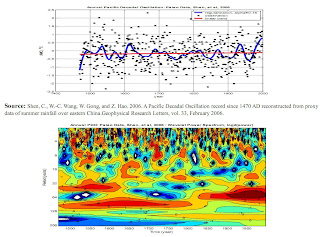 And comes to the following conclusions: 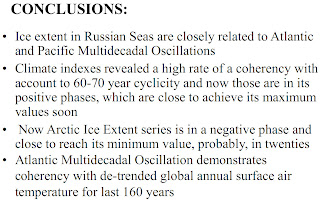 His findings are also in agreement with several other authors who have identified the ~60 year natural climate cycle from a variety of paleoclimate indicators and analysis of ocean cycles. Yet, the IPCC doesn't consider the very important ocean oscillations at all in their climate models, preferring to blame almost all climate change upon man-made CO2. As Dr. Roy Spencer points out in his new book, almost no scientific work is being done to examine these huge natural forcings of climate change, since there is little grant funding for anything other than studies of anthropogenic climate change.
Posted by MS at 11:43 AM