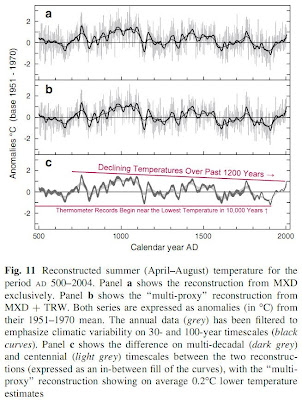 (notations in red added)
Two tenets of AGW theory are 1) tree-ring paleoclimate data reconstructs an accurate portrayal of the climate of the past [except when scientists don't like what it shows, call it a "divergence problem" and hide the decline] and 2) the poles should show the most warming of all. Unfortunately, the Scots pines in the Torneträsk area within the Arctic Circle in northern Sweden around 68.5°N have not received the memo on AGW as of 2004. A 2008 paper shows that the updated Torneträsk data "show a trend of -0.3°C over the last 1,500 years". The trees also say that the end of the Little Ice Age in the late 1800's was the lowest temperature over the past 1,500 years, and according to ice core data was the lowest temperature in the past 10,000 years. By pure chance, this exceptionally cold period is also the same time the global temperature record (HADCRU) begins in 1850. Thus, the global thermometer record showing increasing temperatures in the 20th century mostly represents the recovery from the lowest temperatures of the past 10,000 years during the Little Ice Age. The Torneträsk pines insist that the rate of temperature increase and temperature anomaly of the 20th century was not unprecedented and was less than that of the Medieval Warming Period (~850-1200AD). From the abstract:


The new data show generally higher temperature estimates than previous reconstructions based on Torneträsk tree-ring data. The late-twentieth century, however, is not exceptionally warm in the new record: On decadal-to-centennial timescales, periods around ad 750, 1000, 1400, and 1750 were equally warm, or warmer. The 200-year long warm period centered on ad 1000 was significantly warmer than the late-twentieth century (p < 0.05) and is supported by other local and regional paleoclimate data. The new tree-ring evidence from Torneträsk suggests that this “Medieval Warm Period” in northern Fennoscandia was much warmer than previously recognized.

As the infamous Phil Jones recently admitted in an interview

The Torneträsk pines have a sordid history thanks to Michael Mann's highly flawed "statistical" techniques and mentions in climategate emails. For more on this see:

http://nber-nsf09.ucdavis.edu/program/papers/auffhammer.pdf
Posted by MS at 7:06 PM